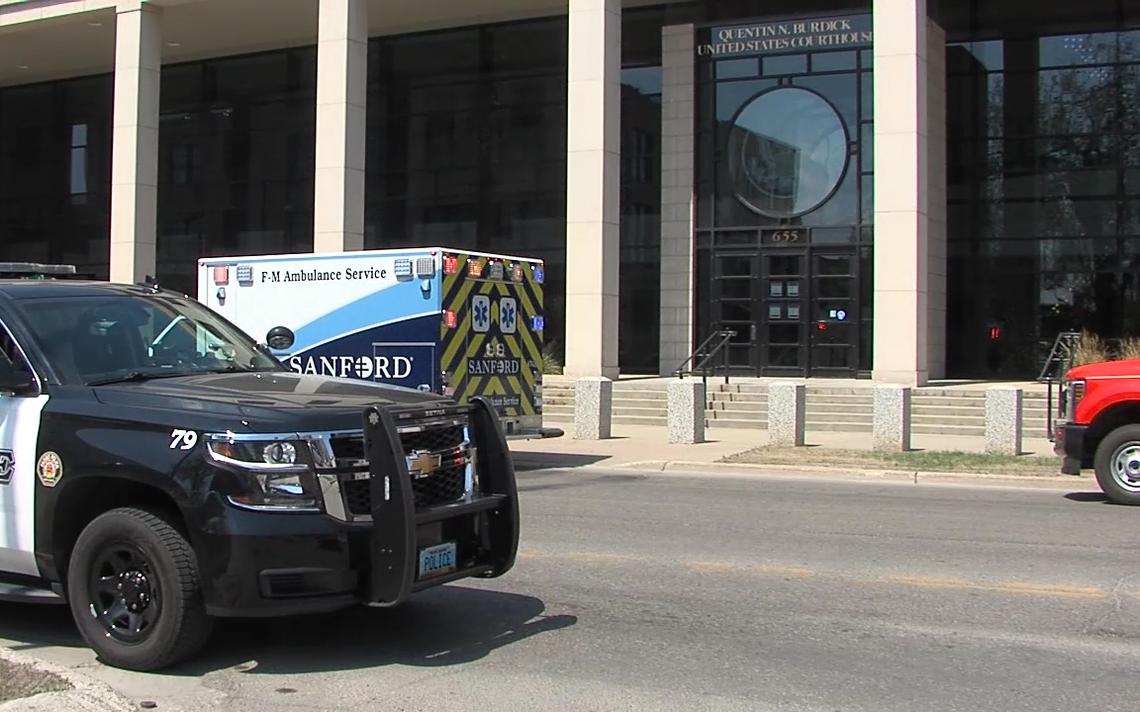 FARGO — A man accused of nearly running over seven children with his SUV took his own life in a Fargo federal courtroom Monday afternoon, May 17, after a jury found him guilty of at least one charge connected to the crime.

Emergency crews responded after 2 p.m. Monday to the U.S. District Courthouse at 655 First Ave. N. for a report of a man who cut his own throat. The U.S. Marshals Service confirmed this happened as a guilty verdict was being read for a trial.

The jury had been escorted out of the courtroom before the defendant cut his throat, a witness told WDAY News.

A witness, who asked not to be identified, was in the courtroom for another hearing that was on the court’s schedule. After the man was found guilty and it was apparent he would face several years in prison, he asked to be released until sentencing, she said. When the judge said no, he then asked to be released for 24 hours to take care of a child care situation. The judge said no to that, too, the witness said.

“The male was standing up. He started fidgeting … with his neck,” she said. “His attorney asked him, ‘What the hell are you doing?’ And the guy turned around, and you could see the inside of his neck. He had slit his neck with some object. There was blood all over the walls in the courtroom, and the Marshals had wrestled him to the floor. You could hear him screaming, ‘I can’t breathe.'”

It’s unclear how the weapon got through security. The U.S. Marshals Service is in charge of checking visitors to the courthouse for weapons. WDAY News has learned the person was out on bond – so he would have accessed the courthouse using the security checkpoint at the main entrance.

Authorities did not identify the defendant. The only trial scheduled for last week in Fargo’s federal court was that of 55-year-old Jeffrey Sahl Ferris, who faced charges connected to an April 2020 incident on the Turtle Mountain Indian Reservation in north-central North Dakota. Court records allege he drove a Jeep toward seven children at “excessive speeds” and nearly hit them.

Ferris is not Native American, according to court documents.

Ferris also assaulted a person with a 9mm handgun, court documents alleged. It is not clear from records if he fired the gun. Ferris faced charges of assault with a deadly weapon, reckless endangerment, terrorizing and using a firearm in a violent felony.

The FBI is working to determine what type of weapon the man used on himself in court and how it got past security.

Anyone who enters the courthouse through the main entrance, which authorities confirmed the defendant in this case did, has to go through a metal detector and potentially faces further searches.

“I can’t remember the last time an event like this happened where somebody was able to smuggle in some contraband into a federal courtroom and die of a self-inflicted wound. Very, very, very odd. Very unusual,” said FBI spokesman Kevin Smith. “We will take our time to get to the bottom of it.”

Authorities said they would release more details on the incident on Tuesday.

Suspect in Jamestown stabbing arrested thanks to anonymous tip to police