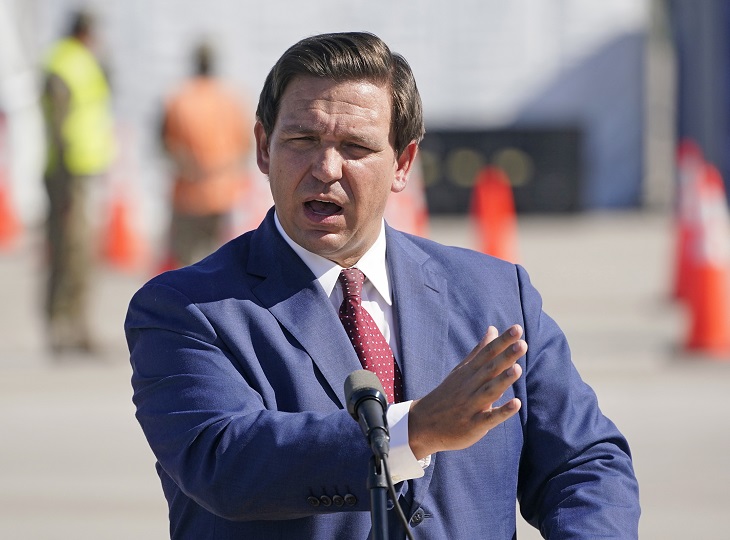 The most recent Covid-19 wave has been one of the most serious waves where all of the states are seeing significant increase in new daily cases, hospitalizations and deaths in the recent weeks despite the fact that almost half of the US is already fully vaccinated.

Florida is among the states seeing the real power of the Delta variant as ICU availability dropped to almost zero and people are seeking treatment in hospitals’ hallways. Meanwhile, President Joe Biden and Florida School Districts are directly blaming Florida Gov. Ron DeSantis over the Covid-19 policies that, as they claim, led to the current situation the state faces.

But it looks like DeSantis came up to an idea with introducing new Covid-19 treatment that might change the Covid-19 game from now on. DeSantis allowed an antibody treatment, the same that was used with former President Donald Trump when he got infected with Covid-19, and the results are pretty impressive so far.

The governor first began talking about it as a treatment last year, but in the recent weeks he was flying around the state promoting the Regeneron monoclonal antibody treatment making the public and hospital officials feel safe when using the treatment.

DeSantis ramped up the call for Floridians to seek out monoclonal antibody treatments in August as coronavirus cases spiked. He’s held news conferences at treatment sites and a Tampa hospital touting the effectiveness of the drug if people receive treatment soon after testing positive.

“Early treatment with these monoclonal antibodies – Regeneron and others – have proven to radically reduce the chances that somebody ends up being hospitalized,” DeSantis said Monday at a treatment site in Orlando. “Reducing hospital admissions has got to be a top priority.”

And he is not wrong according to the health experts. The treatment lowers the chances of hospitalizations and death for more than 70% if patients are given the drug no later than 10 days after the initial Covid-19 symptoms.

Texas Gov. Greg Abbott who also tested positive on Covid-19 meanwhile is also treated with this treatment. DeSantis and Abbott are among the GOP governors opposing mask mandates in schools, something that many parents find concerning amid the latest surge in cases across these states.

DeSantis has threatened to punish school districts that require masks. He’s also opposed to vaccine passports and has had an ongoing legal battle with Norwegian Cruise Lines, which wants to require passengers to show proof of vaccination.

But despite the fact that if the treatment gives the wanted results might change the Covid-19 future, Democrats immediately slammed DeSantis as they tied him to the company that invested millions in developing the drug. According to them, Citadel, a Chicago-based hedge fund, has $15.9 million in shares of Regeneron Pharmaceutical, according to filings with the U.S. Securities and Exchange Commission. Citadel CEO Ken Griffin has donated $10.75 million to a political committee that supports DeSantis — $5.75 million in 2018 and $5 million last April.

It’s simply scary how easily the political opponents will put the politics in front of the public safety. According to NBC News, it’s not unusual for a hedge fund to have a wide range of investments and one of those is BlackRock, which has primarily donated to Democratic candidates, though has also donated substantially to Republicans, has a large holding in the company — more so than Citadel.

Unfortunately, the Democrat supporter and officials continued to war on the social media and DeSantis spokeswoman had to explain everything, all over again.

“Claiming that there is somehow ‘corruption’ by promoting the baseless political narrative that Governor DeSantis supports Regeneron over Covid vaccines (completely false, but that is another topic) is not even logically consistent when you examine the SEC filing,” Pushaw said in an email. “Citadel holds far more shares of Pfizer and Moderna than Regeneron.”

The federal government is paying for the monoclonal antibody treatments and patients aren’t being charged for the antibody cocktail. Florida has set up treatment sites in Jacksonville, Orlando and Brevard County. The state plans to add more sites.

Some of those who attended the Trump rally in Alabama disappointed because he didn’t announce that he was still president, more than 30,000 attended the rally