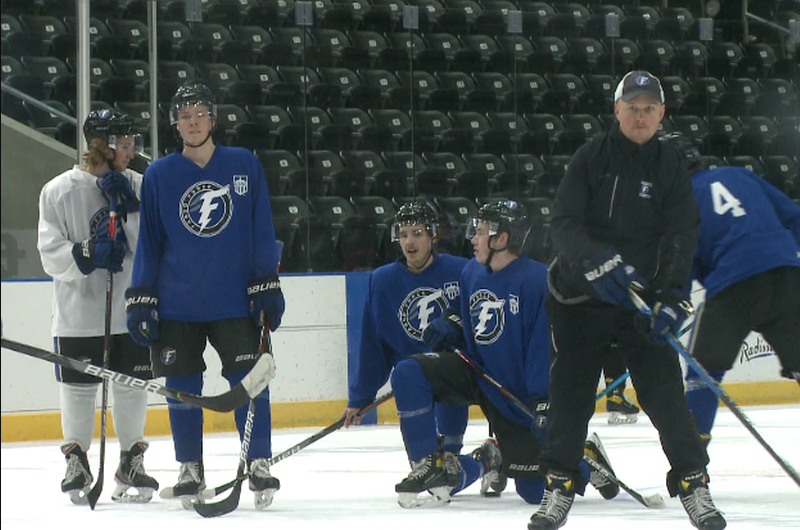 FARGO, N.D. – The Fargo Force are Clark Cup Bound. After battling through two hard-fought playoff series in the Western Conference Championships, the Force now battle the Chicago Steel for the league’s top prize.

“Guys are excited.” Head Coach Pierre-Paul Lamoureux told us at practice this week, “We’re one of two teams standing in the USHL with a chance to compete in the Clark Cup, which has been our goal for the whole year. So a lot of excitement.”

The Force have not had an easy road to the finals. First they toppled the number-one seed in their conference, the Tri City Storm. Then they defeated arguably the hottest team in the USHL, the Sioux City Musketeers, who had won 14 of their previous 15 games.

“We’re a very confident group for sure but I also feel like we’re very loose.” said Goaltender Andrew Miller, who was thrust into the starting position in the middle of the playoffs. “Like, I feel like we’re just playing our game right now and everyone is just loose and relaxed because we know we can perform well when we need to.”

“We believed in ourselves, we’re a confident group, and we were able to win game one, and then game two was a real test of our group with a lot of players out of the lineup with suspensions and what not.” said Lamoureux, “Some players really stepped up for us and we’re really proud of the guys we have inside our room.”

They now prepare for a new opponent they haven’t faced yet this season, a challenge that the team feels they are up for.

“We don’t have to change what we do.” Lamoureux explained. “We’re going to play the way and play the game that got us here.”

Miller summed up the team’s feeling heading into the weekend by telling us that, “I feel like it’s just pure excitement with the boys. Yeah, we’re excited.”

The Force and Steel meet in their best of five series starting May 14th.

The first two games will be in Chicago.