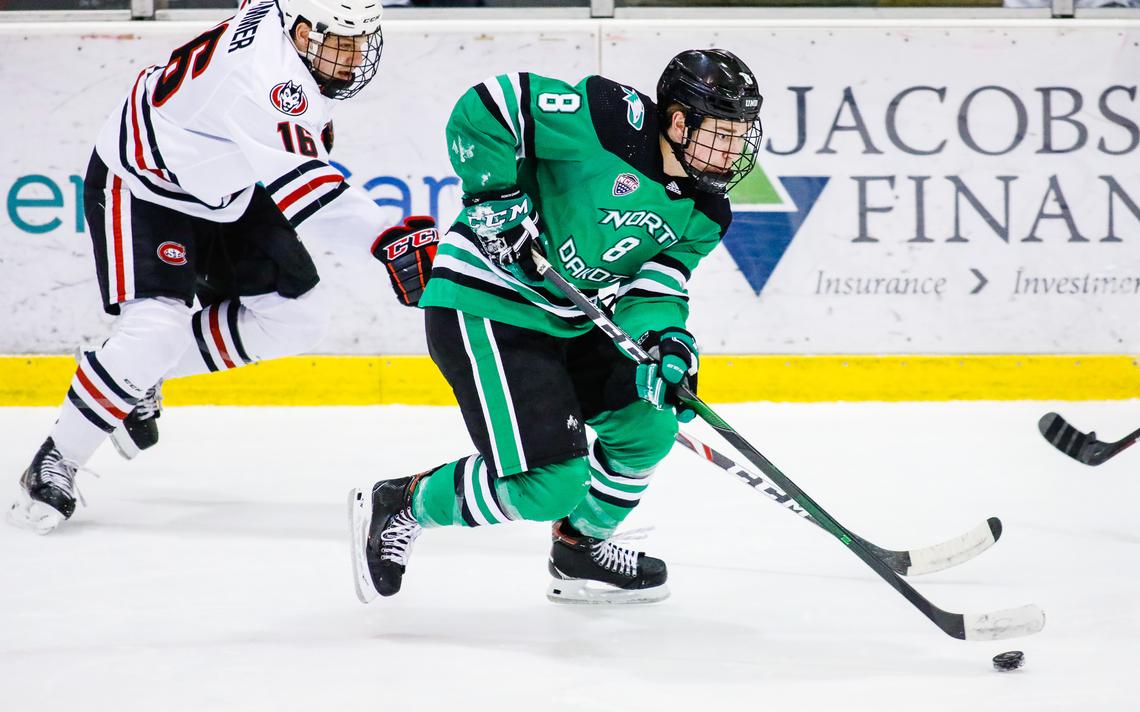 The former UND forward, who entered the transfer portal earlier this month, has committed to New Hampshire for next season.

The news was first reported by Mike Lowry of the UNH blog.

“UND, thank you for the best 2 years of my life,” Blaisdell wrote on Instagram. “Words and pics can only begin to describe what this place and its people have meant to me. Being part of the Sioux tradition is something I’ll cherish and carry with me forever. Excited to start my next chapter on the east coast with (New Hampshire). Till next time NODAK.”

Blaisdell, a fifth-round draft pick of the Winnipeg Jets in 2019, came to UND after playing junior hockey with the Chilliwack Chiefs in the British Columbia Hockey League.

He started his career off with a bang, scoring goals in two of his first three games. His first goal came at home against Canisius and his second one came on a top-shelf backhand at Minnesota State-Mankato. But Blaisdell then went the next 48 games of his UND career without scoring a goal.

As a sophomore, he had no goals and four assists in 19 games for the Fighting Hawks, who won the National Collegiate Hockey Conference’s Penrose Cup for a second-straight season.

Blaisdell will have three years of college eligibility remaining.

The Fighting Hawks are bringing in two transfers to help fill some of those spots in Bowling Green senior Connor Ford and Lake Superior State junior Ashton Calder.

UND has not yet announced which rookies will come to campus, but Nick Portz and Jake Schmaltz are locks.

Knight, who played at UND from 2009-13, was the fifth-leading scorer among all players in the KHL playoffs. He had five goals and 16 points in 24 games for Avangard Omsk.

During the regular season, Knight had 40 points in 57 games.

This was Knight’s second season in the KHL. Last year, he played for Barys Nur-Sultan. Prior to that, Knight played parts of four seasons in the NHL for the Calgary Flames, Florida Panthers and Philadelphia Flyers.

UND incoming transfer Connor Ford was recognized this week for his leadership at Bowling Green.

His former Falcons coach, Ty Eigner, wrote on Twitter that Ford “did a great job leading by example during this difficult season and his entire career!”

Ford played four seasons at Bowling Green, tallying 53 goals and 114 points. He opted to play his final year of college eligibility at UND.

Fully vaccinated athletes no longer will be required to undergo regular COVID-19 testing nor will they be required to quarantine if they are a close contact of someone who is COVID-19 positive, as long as they are asymptomatic, according to new guidelines released by the NCAA.

All UND athletes are currently eligible to be vaccinated. UND athletic director Bill Chaves recently told the Herald that many athletes have started the vaccination process, though they are not required to get the vaccine.

Could an HBCU (Historically Black Colleges and Universities) be joining the Division-I college hockey ranks for the first time?

Tennessee State, located in Nashville, will soon announce plans to conduct a feasibility study for a Division-I hockey team, according to a report in the Nashville Post.

The story said a partnership between Tennessee State and the NHL’s Nashville Predators could be in the works.

Nashville has hosted college hockey games before and will host another one Oct. 30 between UND and Penn State.