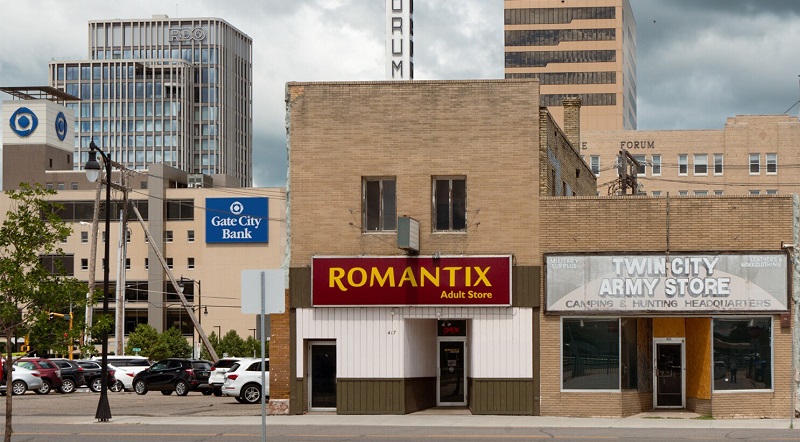 Fargo, North Dakota – Romantix, Inc. sought an emergency restraining order from a federal judge against the City of Fargo, which would have permitted the adult entertainment company to open a storefront on Broadway before the City could amend the codes that would prohibit such a move. The restraining order request was denied.

Romantix’s federal lawsuit against the City, which claims that the City’s Land Use Development (LUD) Code is unconstitutional and violates Romantix’s First and 14th Amendment rights, was dismissed by Judge Peter Welte because the corporation did not show a high probability of success.

“Contrary to Romantix’s characterization of its harm, the LUD Code does not prohibit its business from operating – it restricts where the business may operate,” Welte wrote in his ruling. “Also unconvincing is Romantix’s most recent argument that the City taking steps to amend the LUD Code to add a “Sexual Device Shop” provision will cause it irreparable harm.”

Welte listed the four considerations that went into his choice. They were the risk of Romantix suffering irreparable harm, the balance between that harm and the harm that permitting the harm would bring to others, the likelihood that Romantix would prevail in their federal lawsuit, and the general good.

The judge went on to write that Romantix’s stance would stay the same even if the City amended the code, which is their right, and that there didn’t seem to be any constitutional problems.

The owner of the structure at 74 Broadway North submitted an application for a change of use permit in August, requesting that a Romantix business open there. Nicole Crutchfield, the director of planning for the city, rejected the application, citing LDC rules prohibiting adult bookstores in the downtown area.

Romantix appealed the ruling to the board of adjustments, arguing that the new location shouldn’t be categorized as an adult bookshop because it wouldn’t be selling books or other media. Nevertheless, the board maintained the permit denial, stating that the planned store shared traits with an adult bookstore and that the associated rules should be followed. The City Commission rejected Romantix’s appeal of that decision once more in the middle of October.

The Eighth Circuit Court of Appeals decision in a case that is identical to the one in Jonesboro, Arkansas, is frequently referenced in Fargo’s brief in support of its petition to dismiss. The court in that instance determined that by disavowing the sale of DVDs, books, or magazines, the adult toy store “jettisoned any claim to expressive behavior.”
The preliminary injunction requested by Romantix, according to the city, would actually result in a net loss in protected sexual expression and free speech in Fargo because the company wants to close the store that already sells books in order to open the new store that won’t.

Scott Bergthold, a Tennessee-based lawyer who has defended a number of cities and counties in similar legal battles over their “adult use”-related regulations, has been hired by Fargo to represent the city in federal court.

Romantix filed a federal lawsuit against the City of Fargo in late October, arguing that the LUD Code is illegal and that Romantix is being denied its First and 14th Amendment rights to free speech.

The City claims that Romantix cannot assert a First Amendment claim since it does not intend to sell books or periodicals at the new store in its move to dismiss the lawsuit.

Lane closure on 25th street south to continue into next week