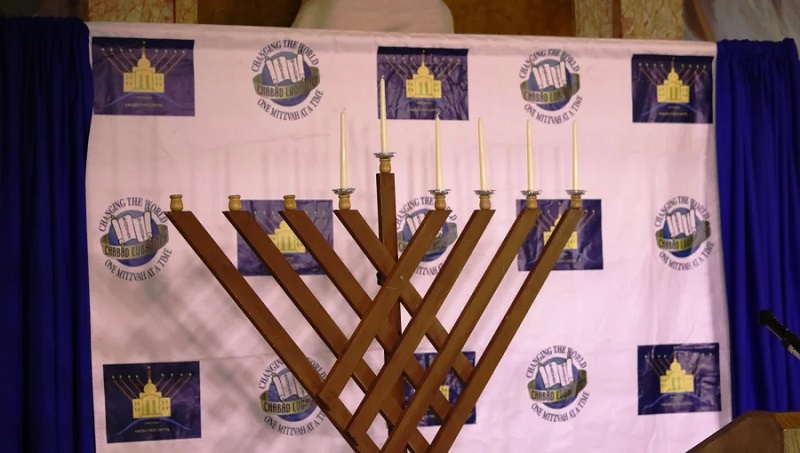 Bismarck, North Dakota — A special service honoring the Jewish holiday of Hanukkah was held on Thursday in the State Capitol despite the chilly and windy conditions.

The fifth night of Hanukkah falls on Thursday. Just a little after p.m., the six-foot-tall Hanukkah Menorah was lit.

An eight-day holiday called Hanukkah honors Jerusalem’s liberation. A different name for it is the Jewish Festival of Lights.

“It’s a story of the Jewish people overcoming the Greeks in an amazing military victory,” said Scott Bernstein, event host. “But they needed to rededicate the temple which took time. And they were going to light what was back then the Menorah., we celebrate it as the Chankkah and they only had one small vile of oil.”

The menorah was kept burning for eight days by that little bit of oil.

From December 18 until December 26, Hanukkah will be celebrated.

“It’s really a reflection of a small group of people putting their faith in God trusting him for a miracle which turned out to be the restoration of the Jewish people,” said Bernstein.

Judy Schmidt traveled all the way from Israel to witness the event. She volunteered for a program that aids people with impairments for two years there.

“It was awesome,” said Schmidt. “Jerusalem was amazing, and of course, it’s the birth of our lord. So we walked all of Israel.”

Schmidt claims that the bitter North Dakotan winter wouldn’t deter her from attending the wedding.

“I’ve been doing Hebrew for about 14 years, so Hanukkah is very significant to me,” said Schmidt.

Hanukkah is not a replacement for Christmas, according to officials at the ceremony.

“It is its own celebration that pre-dates Christmas by a long time and it’s looking at the Jewish life from a very different perspective,” said Bernstein.