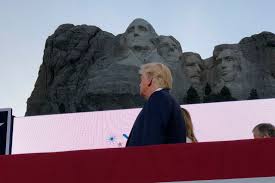 RAPID CITY, S.D. – A Rapid City man accused of threatening to climb to the top of Mount Rushmore and shoot President Donald Trump during an Independence Day celebration on July 3 has been charged in federal court.

Twenty-nine-year-old Lucian Celestine has been indicted on charges of threats against the president and possession of a firearm by a prohibited person. He faces a maximum penalty of 10 years in prison.

Prosecutors say Celestine acquired a Browning bolt-action rifle, scope and ammunition in late June in Rapid City. He is prohibited from possessing firearms.

An affidavit shows that Celestine was committed to the South Dakota Human Services Center for a mental illness in October 2019.

Police clash with Portland protesters and press; more than 20 arrested