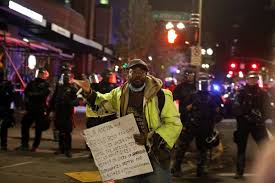 PORTLAND, Ore.  – Police clashed with anti-racism protesters and pushed back members of the press in downtown Portland, Oregon into early Sunday morning, making more than 20 arrests.

The violence followed a relatively peaceful rally by the right-wing Proud Boys group and counter protests by anti-fascist and Black Lives Matter activists on Saturday.

Videos published online showed police pushing protesters and photographers to the ground and jabbing them with batons as officers drove them out of an area near Portland’s federal courthouse.

Police declared a riot after they said rocks and cans were thrown at officers, the Multnomah County Sheriff’s Office reported.

Portland Police spokesman Kevin Allen said the bureau was committed to upholding civil rights and any use of force by officers would be reviewed.

The Northwest city has seen four months of protests against police violence and racism with escalating political violence between left and right-wing activists in the run-up to the Nov.3 presidential election.

“They’ve allowed 120 days of rioting and looting and murder happening within our streets and we’re locals so we’re just tired of this, that’s why we’re out here today,” said Haley Adams, wearing an anti-stab vest and a stars and stripes bandana.

The self-declared “Western chauvinist” Proud Boys had forecast a crowd of at least 10,000 but police said fewer than 1,000 were present.

Police reported four arrests related to the rally. Online videos showed a person pushing a reporter to the ground and kicking him in the face. Police said they were investigating the assault of a person documenting the gathering.

State Governor Kate Brown declared a weekend state of emergency for Oregon’s biggest city, saying large numbers of “white supremacist groups” were traveling from out of state to attend the rally.

City and state leaders said in a letter to the community that Proud Boys supporters planned to cause chaos and violence but that had yet to materialize by early Sunday morning.

Proud Boys leaders said their presence pushed Brown to declare an emergency and create the kind of state and local police task force needed to keep the peace in a city President Donald Trump has called an “anarchist jurisdiction.”

“It’s crazy that it takes us to come here to solve things,” Proud Boys chairman Enrique Tarrio said in video on the group’s Parler page.

Man accused of threatening to shoot Trump at Rushmore event