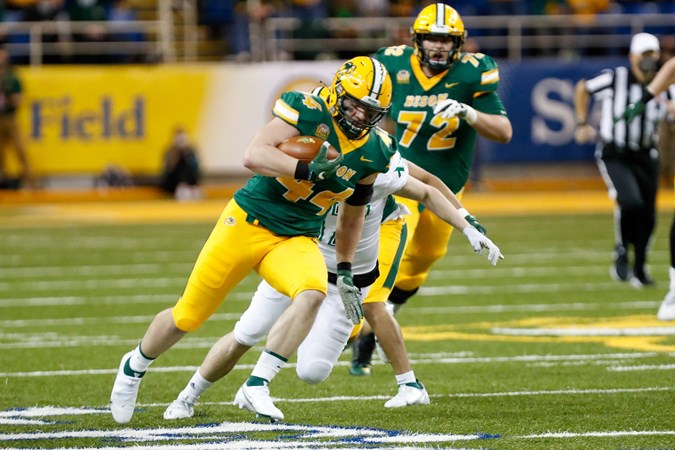 FARGO, N.D.  – Fullback Hunter Luepke accounted for 195 yards and three touchdowns in his first football game of the spring to lead No. 4 North Dakota State to a 34-13 victory over second-ranked North Dakota on Saturday, March 20, before a crowd of 9,121 at Gate City Bank Field at the Fargodome.

Luepke, who missed the first four games of the spring with a shoulder injury, carried 28 times for 190 yards including a 55-yard touchdown run 50 seconds into the game to set the tone for the day as NDSU improved to 5-1 overall and 4-1 in the Missouri Valley Football Conference with its 32nd straight home win.

Luepke’s return was key for NDSU, which played without running back Jalen Bussey and lost Kobe Johnson midway through the game. Freshman Dominic Gonnella carried 12 times for 83 yards as the Bison rolled up 316 yards on the ground and averaged 5.9 yards per carry.

NDSU never trailed in the contest. UND (4-1, 4-1 MVFC) got a 74-yard touchdown run from Otis Weah later in the first quarter to pull within 7-6, but the extra-point kick sailed wide. Weah, the conference’s leading rusher, managed just 55 yards on 12 other carries.

Luepke’s 8-yard TD run early in the second quarter made it 14-6, and the Bison tacked on another score before halftime. Taking over at their own 28 with 1:35 to play, the Bison got a nine-yard rush from Gonnella before Zeb Noland hit wide receiver Christian Watson on a 63-yard passing play to make it a 21-6 game.

UND scored on the opening possession of the third quarter on Bo Belquist’s 21-yard reception from Tommy Schuster, but the Fighting Hawks didn’t pass their own 42-yard line the rest of the game.

Luepke had a 5-yard TD run in the third quarter and Griffin Crosa kicked field goals from 41 and 35 yards in the fourth quarter for the final margin.

North Dakota State is scheduled to play South Dakota at 1 p.m. Saturday, March 27, at the DakotaDome in Vermillion, S.D. The Coyotes are 1-3 this spring after a 28-10 loss at Youngstown State.