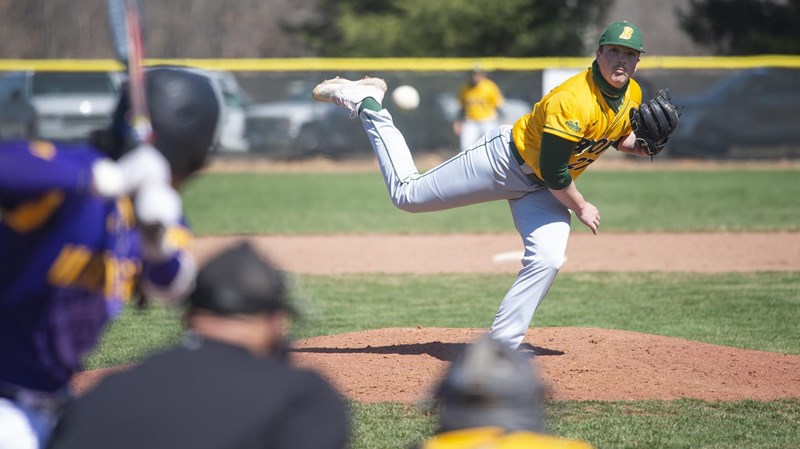 NDSU improved to 14-3 overall and 3-0 in the Summit League, while Western Illinois dropped to 4-12 overall and 0-3 in league play. The Bison have played every game on the road this season, leading the country with 14 road wins and the second-longest road winning streak in the country at eight. NDSU and Western Illinois will conclude the series on Sunday, with first pitch scheduled for 1 p.m. at Alfred D. Boyer Stadium.

Garret Hill, Jack Simonsen and Calen Schwabe each had a pair of hits for NDSU in the opener. Simonsen drove in three runs, while Bennett Hostetler brought in a pair. Jake Malec and Zach Solano each scored twice. With a walk, Hostetler moved into second in NDSU history with his 83rd career walk. Ben Smith struck out a career-high nine on the mound, as he improved to 4-0 in six innings of work. Smith allowed three runs (two earned) on six hits and a walk. Wyatt Nelson picked up his first save, tossing three shutout innings with a strikeout and two hits.

The Leathernecks took a 1-0 lead in the bottom of the first, but NDSU answered with a two-run single by Simonsen in the top of the second inning. Western Illinois tied the game in the third on a run off an error. In the fifth inning, Hostetler doubled to left center, driving in Peter Brookshaw and Malec. The Leathernecks cut the lead to 4-3 with a sacrifice fly in the fifth, but NDSU answered with an RBI double by Schwabe in the sixth to plate Simonsen. A sacrifice fly by Brookshaw plated Malec in the eighth before Solano scored on a sacrifice bunt by Simonsen in the ninth.

Simonsen led the Bison with three hits in the nightcap, while Malec and Hostetler each had two. Hostetler drove in four runs, while Malec and Hostetler each scored twice. It was the 10th multi-hit game of the season for Hostetler, while he also extended his hitting streak to 10 games. Evan Sankey had a no-decision in six innings, allowing three runs (two earned) on three hits and two walks. Sankey struck out seven batters. Jake Drew improved to 2-0, allowing an unearned run on a hit and a walk in one inning. Parker Harm earned his third save of the season, striking out three and allowing a hit in the final inning.

NDSU opened the scoring in the nightcap, as Hostetler reached on an error that allowed Malec to score. Simonsen then singled to left, as Hostetler scored. The Leathernecks cut the lead in half in the bottom of the first on an RBI single. In the fourth, Schwabe singled to bring in Hill before Tucker Rohde was hit by a pitch with the bases loaded to bring in Schwabe. In the bottom of the seventh, Western Illinois scored three runs to force extra innings. In the top of the eighth, Hostetler hit his first home run of the season, bringing in Brookshaw and Malec to give the Bison the lead. Solano singled through the left side to plate Simonsen for the final run.