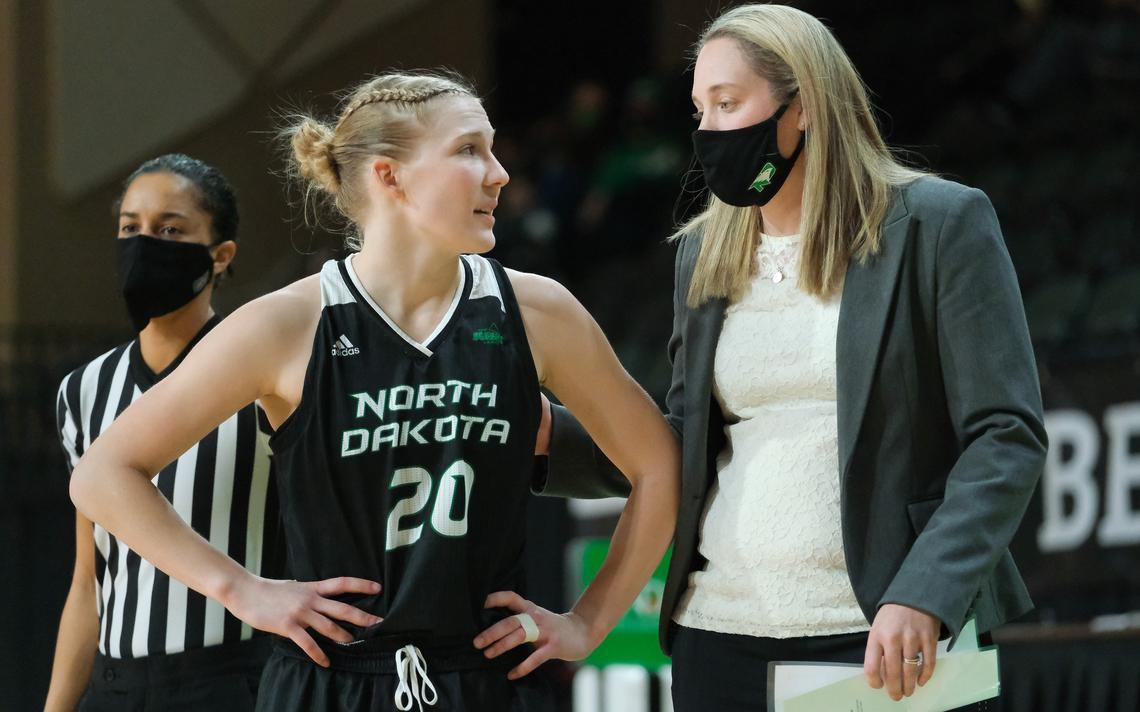 GRAND FORKS, N.D. – University of North Dakota Director of Athletics Bill Chaves officially announced the removal of the interim tag on Mallory Bernhard, officially making her the seventh head coach of the Fighting Hawks women’s basketball program. Bernhard is the first former Fighting Sioux or Fighting Hawk student-athlete to be named to the position.

“I am so incredibly grateful for the opportunity to lead this program and to give back to the program, the university and the community that have done so much for me. Thank you to Dr. Armacost, Bill Chaves, Kara Helmig, Sue Jeno and Chad Karthauser for putting their faith in me, and a special thank you to Coach Roebuck, who not only introduced me to UND 15 years ago, but for his support, guidance and mentorship throughout my career, this past year and during this process,” said Bernhard.

We have a lot of work to do to get this program to the championship level we expect,” she added, “but I am excited to hit the ground running.”

Bernhard was named the Interim Head Coach on March 11, 2020 and remained in the position during the 2020-21 season during the ongoing COVID-19 pandemic.

“Today is a very special day as we officially introduce Coach Bernhard as our next women’s basketball head coach. For the first time in program history, we will have a former student-athlete at the helm of our storied program and that is extremely exciting,” said Chaves.

“Mallory did a tremendous job throughout the process of articulating her vision for our program and what it will take to get us back to a championship level. I would like to thank our Faculty Athletic Representative Sue Jeno’s and Senior Women’s Administrator Kara Helmig’s sage counsel throughout the process and finally, a special thank you to Coach Roebuck for his thoughts as well. His willingness to share his opinions was tremendously valuable and appreciated.”

Through the uncertainty of 2020: canceled games, last-minute schedule additions and roster limitations throughout the season, the University of North Dakota finished 2-19 with a 2-13 Summit League record. The adversity did not hamper the Fighting Hawks spirit though as they led The Summit League in rebounding with 43 per game, lost by five-or-less four times, and played in a program-record three overtime games.

Prior to her interim appointment, Bernhard spent seven seasons on the North Dakota bench as an assistant coach, including two as associate head coach from 2018-20. UND made four consecutive postseason appearances including the program’s first Division I NCAA Tournament berth in 2014. The Fighting Hawks also won the Big Sky Regular Season in 2017.

As a member of the North Dakota coaching staff, Bernhard helped develop a number of players over the years, including UND’s first Division I All-American Madi Buck in 2014, and 2019 Cheryl Miller Award Top-10 Finalist Lexi Klabo, given annually to the top-small forward in women’s college basketball.

Before beginning her collegiate coaching career, Bernhard coached two seasons at her alma mater Assumption High School, leading the Knights to a pair of Iowa 3A State Championships in 2012 and 2013. She was twice named the state’s 3A Coach of the Year and earned Coach of the Year honors from the district and from the Quad City Times. Assumption finished 50-4 under Bernhard with a 31-1 conference record, finishing 16-0 in the Mississippi Athletic Conference during her first season.

As a member of the Fighting Sioux basketball program, Bernhard was a First Team All-Great West Conference selection twice and was named to the All-Tournament team in 2010. She helped UND to its final NCAA Division II Tournament berth as a freshman in 2008 and was Team Captain of the 2010-11 North Dakota women’s basketball team, the final season under UND Athletics Hall of Fame Coach Gene Roebuck.

Bernhard is 18th all-time in scoring at UND (1,307) and ranks among the top-10 several statistical categories at the University of North Dakota, including career free-throw percentage and career three-point field goal makes.

“I’m very happy for Mal to get this opportunity at the University of North Dakota. Throughout the years this team has had a rich tradition on the court and in the classroom. Being the student-athlete that she was when I coached at UND, I know that Mallory will lead this program in the right direction. It will take time and some patience, but the pieces are there to put the puzzle together and make the University of North Dakota a force in The Summit League.”

“Head Coach Mallory Bernhard is not only a genius when it comes to the game fundamentals, but she is a servant-minded, selfless leader who met me where I was at, and built me to my best. Without Coach Mal I know I would not be fulfilling my dreams of attending medical school while still getting to have a career-best season. Her genuineness of wanting to empower my teammates and me to leave UND women’s basketball as the most confident, strong women we can be has single-handedly made my experience at UND something I would never trade. She instills North Dakota pride while making it bigger than basketball, reminding us of the family we have in UND Athletics. Someone like Mal is an athlete’s dream: a coach they want to win for, do the extra for and give the game everything they have for. A head coach who is willing to grow alongside her athletes is a rarity to be treasured.”

“During my career at UND I had the privilege and good fortune of being coached by Mallory Bernhard. Her ability to connect with players on and off the floor, and provide them avenues of growth using her passion, basketball knowledge and work ethic is something any program would be lucky to have. The dedication she has to her athletes, colleagues and fans of the program makes her a tremendous asset. I admire her expertise and eagerness to continually improve within her craft and it is what motivated me to become the best player I could be.”