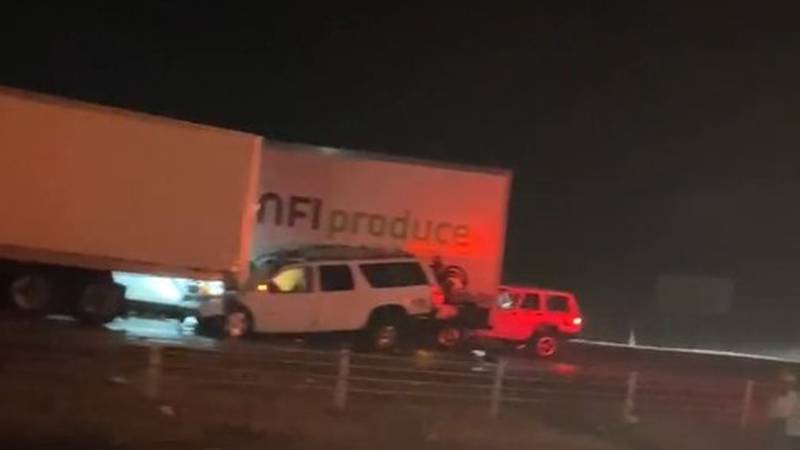 Jamestown, North Dakota – About 24 vehicles, including a North Dakota Highway Patrol vehicle, were involved in a series of chain-reaction crashes on I-94 near Jamestown Wednesday evening.

The Highway Patrol says the weather was a contributing factor in the pile-up as a fine mist was falling at the time, causing the road to becoming icy.

According to the North Dakota Highway Patrol, around 6:30 p.m., a trooper saw a semi jack-knife on the interstate and partially block the roadway.

The trooper parked on the scene with his emergency lights activated and got out to investigate.

Within minutes, a passenger car crashed into the back of the highway patrol vehicle. The trooper had to jump into the median to avoid being hit in that crash and was not injured.

The vehicles stopped on the road, coupled with an increasingly icy highway, quickly resulted in a rapid succession of crashes — about seven incidents involving 24 vehicles in total.

A number of people were transported to the Jamestown Regional Medical Center for injuries sustained in the crashes. The Highway Patrol reports the most serious injury was a broken leg.

The pile-up closed the westbound lane of I-94 from 6:30 p.m. until 10:00 p.m., to allow for the investigation of the crashes and the removal of all the vehicles involved.

Both the Highway Patrol and the Stutsman County Sheriff’s Office are working on the crash investigation.

What to do if you’re stranded in a blizzard