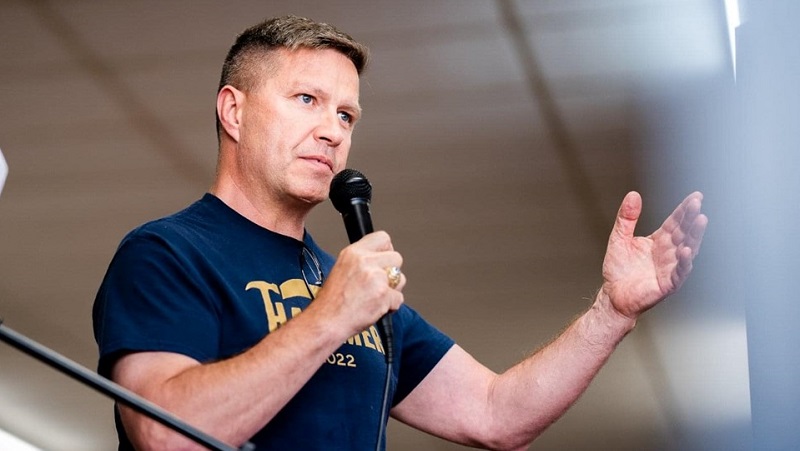 North Dakota – This individual has expertise managing a staff as a Marine Corps Trainer and a technical background as a Navy Nuclear Power Machinist.

Trygve Hammer, a DemNPL candidate for the public service commission argues that the commission ought to represent a wider range of viewpoints than it now does.

About why is he running for this position, Trygve says:

“I’m running because I feel like there is some dissatisfaction out there with the way the state government is working right now. I come from a background, I was Navy enlisted out of high school, I went to the Naval Academy. And from there I went Marine Corps. And part of the reason I went Marine Corps or a big part of it is because the Marine Corps has this ethos of officers eat last. And, that’s a big part of who I am. And I feel like our state government right now is the complete opposite of that. I feel like it’s really a government of the privileged for the privileged,” explained DemNPL candidate for Public Service Commission Trygve Hammer.

Some of his priorities for this office are the following:

“Well, going out on the campaign trail, and as you know, the PSC does a lot of different things, reaches into people’s lives more than they really know that it does. But the two big things we’ve heard about recently are electric rate increases, and the Summit Carbon Capture pipeline. They have just put in the request for a permit, and that will be decided by the Public Service Commission sometime in the near future. Now, Julie Fedorchak, the chairman of the PSC, has rightly recused herself from that, because, you know, she has leased land to the company, for their right away through there. And like I said, that’s the right decision. But we really need to know more. And I’m not saying just about Julie Fedorchak’s land, but the state legislature needs to pass something into law and the governor needs to sign it that fixes the way that this works. Because there’s a lot of landowner dissatisfaction out there. And right now, I don’t think they really trust the state legislature and the governor who signed in into law, the pore space bill, to watch out for them. It would be very easy to change the law, so that when a company was looking for a right away for a project like this, that every landowner would know what every other landowner was being paid, you know, because a lot of times on this project, in particular, what I’ve heard is, you know, somebody is just they’re going diagonally across our field, they’re cutting through our drain tile. So that should bring in more compensation than if it’s skirting your land. So it’s a little complicated, but it would be very easy to make it way more transparent for everybody. And I really think the Public Service Commission should say, No, hold on, we’re not going to approve this thing until you fix the law and create this transparent system. I don’t feel like the priority is on watching out for the people of North Dakota, as much as it is watching out for the industry, and staying friendly with the industries that they are regulated. You know, a lot of them have backgrounds in those industries, including on boards and such. And, you know, I don’t think there’s a conflict there. But I think it helps to have a variety of interests and a variety of viewpoints on any board. Why have three Public Service Commissioners if they all think the same way?” posed Hammer.

Federal lawsuit was filed after a cyclist died nearby in June

Construction continues even during the winter weather