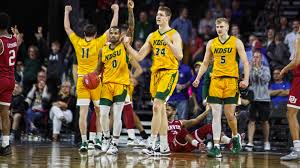 The top-seeded North Dakota State men’s basketball team pulled out a 71-69 victory over No. 8 seed Denver in the quarterfinals of the Summit League Tournament on Saturday evening.

NDSU was led by 22 points from senior Vinnie Shahid and 20 from senior Tyson Ward. Sophomore Sam Griesel finished with a double-double, posting 10 points and a career-high 13 rebounds.

Shahid hit a three-pointer with 1:22 remaining to give NDSU a 67-65 lead, and later hit the game winning free throws after being fouled with six seconds on the clock.

NDSU led 36-30 at halftime and pushed its advantage to 10 at 46-36 with 15 minutes to play. The Pioneers stormed back and went ahead by as many as six at 58-52 with just over eight minutes remaining.

Denver remained ahead with less than four minutes to play, holding a 65-62 advantage. After a pair of free throws from Rocky Kreuser, Shahid’s stepback three gave NDSU a 67-65 lead. Denver tied the game at 67 and again at 69 in the final 70 seconds.

With the shot clock off, Shahid drove and was fouled with six seconds left, hitting both free throws. NDSU came up with a defensive stop at the rim to seal the victory.