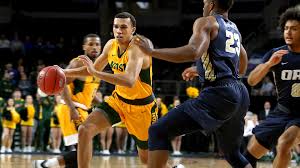 The top-seeded North Dakota State men’s basketball team earned a 75-69 victory over Oral Roberts in the semifinals of the Summit League Tournament on Monday evening, advancing to the championship game for the sixth time in eight seasons.

Ward drilled a three-pointer on NDSU’s next possession, and the Bison never trailed again. Cameron Hunter was clutch at the free throw line down the stretch, going a perfect 10-for-10 to score 10 of his 12 points from the line.

Shahid had a pivotal tip-in with 54 seconds left to stretch the Bison advantage to 65-59.

NDSU made 9-of-24 (37.5 percent) from three-point range and committed only six turnovers in the game.

The Bison will play either No. 6 seed North Dakota or No. 7 seed Purdue Fort Wayne in Tuesday’s championship game at 8 p.m. CT on ESPN2.