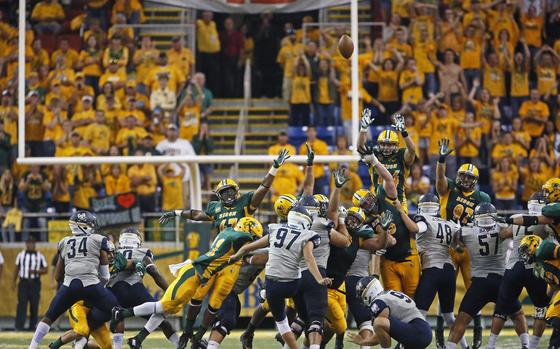 FARGO — It was over two weeks ago when North Dakota State offensive line coach AJ Blazek tweeted the end to a season that never happened for six seniors. After searching for opponents, the Bison called an end to fall camp on Aug. 14.

On Tuesday, Sept. 1, practice will resume. Blazek’s tweet was too early after all.

The six seniors and the rest of the offensive line will get back at it including coveted left tackle Dillon Radunz, who announced last Friday he’s going to play the Oct. 3 game against Central Arkansas and then start training for the NFL.

“I’m jacked just to be a part of his journey,” Blazek said.

That journey in the last year had its share of other teams trying to get him to transfer in the same way linebacker Jabril Cox moved to LSU as a graduate transfer. Blazek said he warned Radunz last winter that “guys will start to reach out to him.”

“He was naive to that part,” Blazek said. “But he never wavered once. He’s a man of his word. People say certain things change that but for this guy, whoever gets him, I know they’ll be getting a one in a million.”

It’s against NCAA rules for other teams to start fishing for players in other programs.

“They all do in this day and age,” Blazek said. “Is it illegal? Sure it is, we know people out there doing it. My job is to educate guys that it will happen.”

The 6-foot-6, 299-pound Radunz was a consensus all-American first team selection for a Bison team that went 16-0 last year and won its third straight FCS national championship. It was NDSU’s eighth in the last nine years.

He’ll be flanked at right tackle by senior Cordell Volson, a fifth-year senior who stands 6-7, 313. Blazek said he’s not sure where the NFL workout plans fit with Volson.

“Cordell is Mr. Bison, he’s enjoying every day with his teammates right now,” he said. “When the time is right, he’ll figure out what the right thing is to do. School is going well for him, he’s from North Dakota, to me he’s every bit of the player and character and person that Dillon is.”

The other returning starters are senior center Karson Schoening and junior left guard Nash Jensen. Three other seniors are back in guards Zach Kubas and Quinn Alo and tackle Josh Howieson.

It remains to be seen how many linement will return after Christmas. The Missouri Valley Football Conference moved league games to the spring and the NCAA Division I Council is expected to announce an FCS playoff format in the next month.

If a few don’t return, it makes the next five weeks of practice crucial for younger players to make an impression. Blazek calls players one through 20 “a talented group.”

“We should be deeper than last year,” he said. “We have three or four more guys who are all a year older and we only lost one (guard Zach Johnson). In terms of years playing, there are a lot of years in that room right now.”

And a lot of ability. In his Aug. 14 tweet, Blazek alluded to the six seniors being part of potentially one of the greatest offensive lines in NDSU history.

“You go to different places, everything is different and there are different variables,” said Blazek, who’s coached at Rutgers, Western Illinois and Iowa. “But there is no doubt in my mind this group has the opportunity to be the best group I’ve had the opportunity to coach. They have every character covered in the room. They all lead in different ways with the six seniors and the young guys.”

FCS playoff field next spring on track for 16 teams