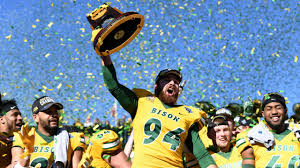 FARGO — Missouri Valley Football Conference commissioner Patty Viverito has been pushing for a 16-team FCS playoff field this spring. It appears she’ll get her wish.

Viverito, a member of the Football Oversight Committee, said two weeks ago discussions centered between a 12- or 16-team field, down from the traditional 24. That 16-team field will include 10 automatic qualifiers and six at-large selections.

The Oversight Committee will take its formal position at its videoconference meeting on Thursday. April 18 is a Sunday so it’s probable the first round of the playoffs would be held the weekend of April 24 and the title game could be held on Saturday, May 15.

Frisco, Texas, has hosted the championship game every year since 2011, but there is no word if that would be the case with a spring season.

What Championship Committee legislation means for North Dakota State is an eight-game Missouri Valley season would most likely begin Feb. 27. With 29 allowable practices and one week of acclimatization before that, practice would begin sometime in January.

NDSU faces Central Arkansas on Oct. 3 at Gate City Bank Field at the Fargodome, the only game this fall for the Bison.

Bison coach calls Radunz a one-in-a-million player, said other teams tried to get him to transfer