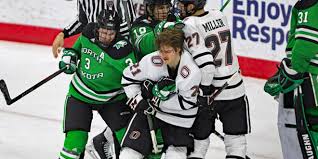 The NCAA men’s hockey tournament is now less than two months away.

Fargo’s Scheels Arena is slated to host a regional on March 26-27.

But as that date quickly approaches, college hockey coaches and conferences still have received no direction from the NCAA Division I Men’s Ice Hockey Committee on how it plans to select and seed the 16 participating teams.

“Nervousness, a little bit of anxiety and I guess you could say a little bit of frustration,” UND coach Brad Berry said. “We’re going through a COVID year here and things are changing as we go. It’s about being flexible. You’ve got to be open-minded and you’ve got to make sure you’re doing the things you need to be doing to give yourself a chance here. Hopefully, there will be some certainty or some clarity in the next few days or weeks.”

That hasn’t been the case to this point.

In a normal year, the Pairwise Rankings are used to select and seed the national tournament. The Pairwise uses an objective formula, which teams can easily track, day-by-day, hour-by-hour, even minute-by-minute. When a game finishes, teams know immediately where they stand.

Before ESPN airs the NCAA tournament selection show, everyone already knows which teams are in it. The only questions are the matchups and locations.

“I was on an American Hockey Coaches Association call yesterday and there was some discussion but there was no certainty on that topic from the NCAA,” Berry said. “There was supposed to be somebody from the NCAA on the call but they weren’t, so obviously we didn’t get any clarity on that side of it.

“But we have scheduled meetings every couple of weeks and hopefully in the next few weeks, we’ll find out what that is. I think everybody has a little anxiety of not knowing for sure what the process or protocol is. But the biggest thing for us, for our program, is focusing on ourselves and taking care of business and that’s trying to win games, which lends itself to the committee putting you into the tournament.”

It is assumed that the Committee will be using some sort of eye test to determine the field, much like weekly USCHO and USA Today/USA Hockey pollsters.

But it’s unknown whether it will use any other metrics for help.

National Collegiate Hockey Conference commissioner Josh Fenton has advocated for the Committee to use historical data to average how many bids each league usually receives, then allot each league that number.

Wodon and other CHN reporters use the eye test to compare teams from different leagues. The Power 16 also uses a mathematical formula, KRACH, to compare teams within the same conference. Because of unbalanced schedules in conferences, using strictly the standings might not be entirely fair.

Wodon also said he is heeding the Committee’s original intent to count overtime wins as 55 percent value of a full win, and overtime losses 45 percent. The CHN Power 16 takes that into account.

The CHN Power 16 has UND at No. 2 this week, only behind Minnesota. The Fighting Hawks are ranked No. 2 in the USCHO poll and No. 3 in the USA Today poll, putting them in prime position to make the tournament and be a No. 1 seed.

“It’s obviously a little different this year without there being Pairwise Rankings,” UND goalie Adam Scheel said. “It just goes one game at a time, one day at a time. That’s always our mentality. That’s always our attitude, regardless of the year, regardless of what weekend it is. We take it one practice at a time, one skate at a time. Our biggest opponent is the next one. Once we get to the tournament, we’ll cross that bridge once we get there.”

While the coaches and fans eagerly await more information from the Committee, here are a few things we know:

The NCAA is planning to keep the regionals and Frozen Four in their pre-determined places.

Fargo, Loveland, Colo., and Bridgeport, Conn., will host three of the regionals. Manchester, N.H., was scheduled to host the fourth, but it pulled out this week. The NCAA is looking for a new location to host the fourth regional.

The NCAA Frozen Four is expected to remain in Pittsburgh, for now, on April 8-10.

Teams need to play 13 games to be considered for the NCAA tournament.

In the West, this isn’t a problem. Every NCHC and Big Ten team has already hit that threshold. Most Western Collegiate Hockey Association teams are on the verge of it.

But there are two teams in the East where this has potential to become problematic — Boston University and UMass Lowell.

Boston University (5-1) has played just six games and entered another shutdown Wednesday. It is unknown when the Terriers will be able to play again. But with a record of 5-1 and a resume that includes a sweep of UMass, the Terriers would seemingly be a threat to make the tournament if they reach the 13-game threshold.

UMass Lowell (3-1) has played just four games, but also was expected to contend for an NCAA tournament spot this season.

The Committee won’t have to worry about deciding how to rate an independent team.

The Sun Devils, who made the NCAA tournament in 2019 and would have made it again in 2020 if not for the pandemic shutdown, are 5-13-2. They have eight games left on the schedule. If they lose or tie any of them, they’ll be guaranteed to finish under .500, which makes them ineligible for the tournament.

North Dakotans may vote on legalizing sports betting in 2022