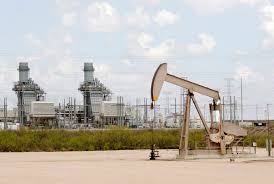 CHICAGO – The massive downturn in the beleaguered oil market is compounding financial problems for U.S. states and local governments that rely on energy production for revenue and raising concerns for their bond investors, analysts said on Tuesday.

Crude oil has plunged in value, and storage tanks around the globe have rapidly filled after efforts to slow the spread of the novel coronavirus slashed oil demand.

This week, U.S. crude oil futures prices plunged into negative territory for the first time ever as storage at the country’s key storage hub in Cushing, Oklahoma, filled faster than expected, forcing investors to quickly sell their contracts before taking delivery of physical barrels with no place to put them.

“It’s always a concern when prices drop like this,” said Steve Murray, a Fitch Ratings analyst who covers local governments in oil-producing Texas. “Obviously it’s a double whammy because you’ve got the coronavirus impact on economic activity and now you’ve got a collapse in oil prices.”

Oklahoma officials on Monday declared a nearly $417 million “revenue failure” for the current budget, which clears the way for the state to tap its reserve fund. They projected that revenue for the fiscal year beginning July 1 will total $6.88 billion, a $1.36 billion decrease from a February forecast due to the virus outbreak and the downturn in oil and gas.

David Hitchcock, an analyst at S&P Global Ratings, said while some of the oil-producing states have “very large” reserves, the oil drop “will open up deficits that will draw down those reserves more quickly.”

In Texas, state Comptroller Glenn Hegar said a reduction in oil severance taxes would primarily affect the rainy day and highway funds and to a lesser extent general revenue needed for the state budget.

“While this unprecedented volatility is concerning, the greater impact to Texas will come if demand remains historically low for a prolonged period of time and supply gluts continue to strain storage capacity,” he said in a Monday statement.

John Ceffalio, municipal credit research analyst at AllianceBernstein, said credit deterioration is a concern although debt issuance is relatively low in some oil-producing states like Alaska and Wyoming, while Texas, a big debt issuer, has a large economy in its favor.

“Investors should be paying attention, and if the lower prices hold, we could see (rating) downgrades across the oil patch,” he said.

Alaska, the state with the greatest dependence on oil for its budget, was downgraded last week by S&P to AA-minus from AA after its latest revenue forecast indicated a $527 million general fund revenue drop in fiscal 2020 and $815 million in fiscal 2021 due largely to falling petroleum-related revenue. In late March, Fitch Ratings placed Alaska’s credit ratings on a watch list for a potential downgrade.

How Trump allies have organized and promoted anti-lockdown protests