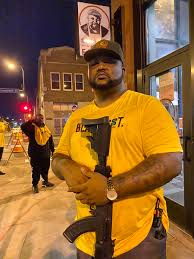 MINNEAPOLIS – It’s approaching 2 a.m., and city council member Jeremiah Ellison is patrolling his neighborhood in a black sedan when the smell of smoke wafts through the open driver’s side window.

Several black-owned businesses had been destroyed in this area – considered the heart of the city’s black community – in recent fires that investigators have deemed “suspicious.” Neighbors suspect right-wing militias, and social media has been abuzz with purported – but unverified – sightings of masked white men in pickup trucks holding semiautomatic military-style rifles.

The rumors have only fueled the unease that has spread through this community since the death of George Floyd, who lost consciousness under the knee of a police officer on Memorial Day. A video of Floyd’s gasps for air triggered massive protests and violent riots that started in this Midwestern city before spreading throughout the country.

Now Ellison – the son of former congressman Keith Ellison, who is prosecuting the four fired officers connected to Floyd’s death, as Minnesota’s attorney general – is on patrol, hoping to catch the next fire before it destroys another business owner’s livelihood. He’s also ready to contend with danger of the more human sort, if needed.

As the car fills with the acrid scent of burning chemicals, Ellison tells his friend in the driver’s seat to pull over. Before they come to a stop, Ellison, 30, flings open the door and jumps out with a pistol in one hand and a small fire extinguisher in the other. He walks briskly down the street, scanning the block for the origin of the fumes.