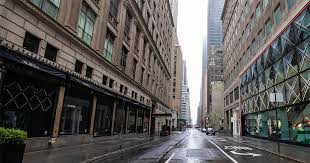 NEW YORK  – The forced closure of businesses across the United States and surge in unemployment due to the coronavirus pandemic will force U.S. growth to contract by 30% in the second quarter and 5% overall in 2020, Pacific Investment Management Co (PIMCO) wrote on Wednesday.

In a blog post, Tiffany Wilding, a North American economist at PIMCO, wrote that evidence from recent jobs reports suggests the unemployment rate may rise as high as 20%.

The 30% contraction in growth in the second quarter would likely be followed by two quarters of recovery, Wilding wrote. While two quarters of contraction is shorter than the four recorded in the 2008 financial crisis, the depth of the shock is far greater – quarterly contractions did not rise above 8% during that time.

California-based PIMCO is one of the world’s largest investment firms with $1.91 trillion assets under management as of Dec. 31 2019.

“The speed and magnitude of the U.S. labor market disruption has been sharper than any we’ve seen in recent history, suggesting that the decline in overall activity has also likely been much more severe,” wrote Wilding.

In spite of the already enormous spate of layoffs, the number of jobs lost is likely to continue to rise as more states close non-essential businesses. The figures are also expected to rise as unemployment offices work through a backlog of claims. Wilding notes that the government’s March employment report showed that layoffs had begun earlier than suggested by weekly unemployment data, and were spread across industries, including healthcare, which PIMCO had expected to remain resilient.

In spite of the U.S. government’s unprecedented fiscal and monetary stimulus programs, there are still meaningful risks to the U.S. economy, the post said. The stimulus may not be large or fast enough to prevent waves of bankruptcies, and the pandemic experience may fundamentally change U.S. consumer behavior.

Additionally, there are segments of the market that are excluded from the stimulus and bond-buying programs, including speculative-grade companies, which are likely to experience a surge in bankruptcies. Those defaults, and the loss of millions of jobs, could ultimately worsen the economic crisis.

After the peak of the pandemic in the United States, which is currently forecast for May or June, PIMCO expects a recovery in growth as businesses reopen and rehire workers. Some sectors may bounce back faster than others. Construction and some manufacturing, along with other industries dependant on advanced lending and project planning are likely to recover more slowly.

How Trump allies have organized and promoted anti-lockdown protests