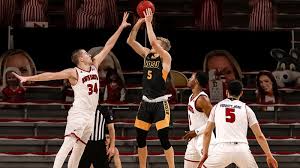 VERMILLION, S.D.– South Dakota beat the North Dakota State men’s basketball team, 80-71, on Saturday afternoon to eliminate the Bison from contention for the Summit League regular season championship. The Coyotes improved to 11-3 in the league, while NDSU fell to 10-5.

South Dakota got 26 points from Stanley Umude and 20 from A.J. Plitzuweit. The Coyotes shot 47 percent for the game, outpacing NDSU’s 41-percent shooting.

The Bison led 17-10 eight minutes into the game, but a 25-6 run by the Coyotes put USD comfortably in the lead before halftime. NDSU pulled within five at 54-49 with just over five minutes remaining, but South Dakota scored the next six points to answer.

The two schools will play again Sunday in the regular season finale, with tip scheduled for 3:30 p.m. following the 1 p.m. women’s game.