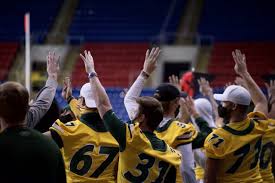 Salukis hand Bison their first loss of the season

It was tough game for NDSU Football players and fans, as the Bison were handed their first loss of the season against Southern Illinois 38-14 on Saturday.

For many Bison fans, last game wasn’t quite what people were expecting.  The Bison just couldn’t get anything going throughout the whole game. The Salukis started the scoring in their second drive of the game driving 49 yards down the field in twelve plays, ultimately settling for a 39-yard field goal.

In the second quarter, SIU’s Romeir Elliot scored a three-yard rushing touchdown after they marched 93 yards down field in twelve plays giving them a 10-0. On the Salukis next drive, they worked their way down the field again scoring a touchdown from a one-yard Javon Williams run. The Bison showed a little resilience after Zeb Noland connected with Jake Lippe in a 37-yard ‘hot potato’ end zone grab on the last play of the half, but the Herd still trailed 7-17.

Neither team would score in the third quarter, but in the fourth quarter the Salukis started clicking again after critical fumble recovery at midfield.

SIU drove down the field in five plays, Landon Lenoir targeted Nic Baker for a seven-yard passing touchdown, giving the Salukis a 24-7 lead. NDSU would take the field again hoping to make something happen, but an untimely interception from the Herd’s Noland set the Salukis up in good field position again. The Salukis capitalized once again with a three-yard score Williams, his second of the game as SIU took a 31-7 lead, effectively icing the game.

A Noland touchdown run from five yards out was far too little, far too late. The 39-game winning streak, the longest in the history of FCS football, was over.

The Bison will look to bounce back after this game when they gear up to play Missouri State. The Herd will be on the road again for the game on Saturday, before returning home in two weeks.