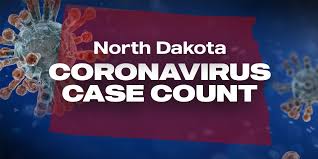 The North Dakota Department of Health on Thursday, Dec. 31, reported 10 COVID-19 deaths and an overall increase in active cases.

The deaths came from all over the state and included two residents from Cass County, and one each from Burleigh, Morton, Ramsey, Williams, McKenzie, Hettinger and Stark counties. A Grand Forks County man who died in his 50s was significantly younger than the average age of people who have died with the virus in North Dakota.

Over the last month and a half, active COVID-19 cases have plummeted from their peak of more than 10,000 on Nov. 13, though Thursday’s report marked the second day in a row with an increase in active cases. Now, 1,889 North Dakotans are known to be infected with the virus, up 68 from Wednesday. With the declines of the last few weeks, active virus cases in North Dakota are hovering around their lowest point since the beginning of September, when the state was still in the early stages of its fall surge.

The health department says 1,292 North Dakotans have died with COVID-19 since March. The state is averaging nearly eight deaths per day in December, marking a drop from November when an average of more than 16 North Dakotans died each day. However, the state has the fourth-highest number of deaths per capita in the country over the course of the pandemic, according to the Centers for Disease Control and Prevention.

Virus deaths tend to be a lagging metric of an outbreak, and, with 233 deaths recorded over the last month, December has been the pandemic’s third deadliest month in North Dakota.

At least 768 of the state’s deaths have come in nursing homes and other long-term care facilities. There are 50 infected nursing home residents in the state, down more than 300 from the beginning of the month.

Virus hospitalizations have also cleared significantly, down by more than 200 people from mid-November. On Thursday the number of North Dakotans hospitalized with COVID-19 dropped by two from the day before, and this week the state dipped below 100 virus hospitalizations for the first time since September.

The department reported 303 new cases on Thursday, including:

About 3.86% of the 7,859 residents tested as part of the latest batch received a positive result, and the average positivity rate of those tested in the last two weeks is about 4.5%. The state does not yet report how many residents tested negative on rapid antigen tests, though 74 of Thursday’s positives came from the new 15-minute tests.

Health care workers began receiving their first doses of the newly released COVID-19 vaccines earlier in December, and vaccinations in state nursing homes began this week. As of Tuesday, Dec. 29, North Dakota had administered more than 13,000 vaccine doses and had received nearly 12,000 more.