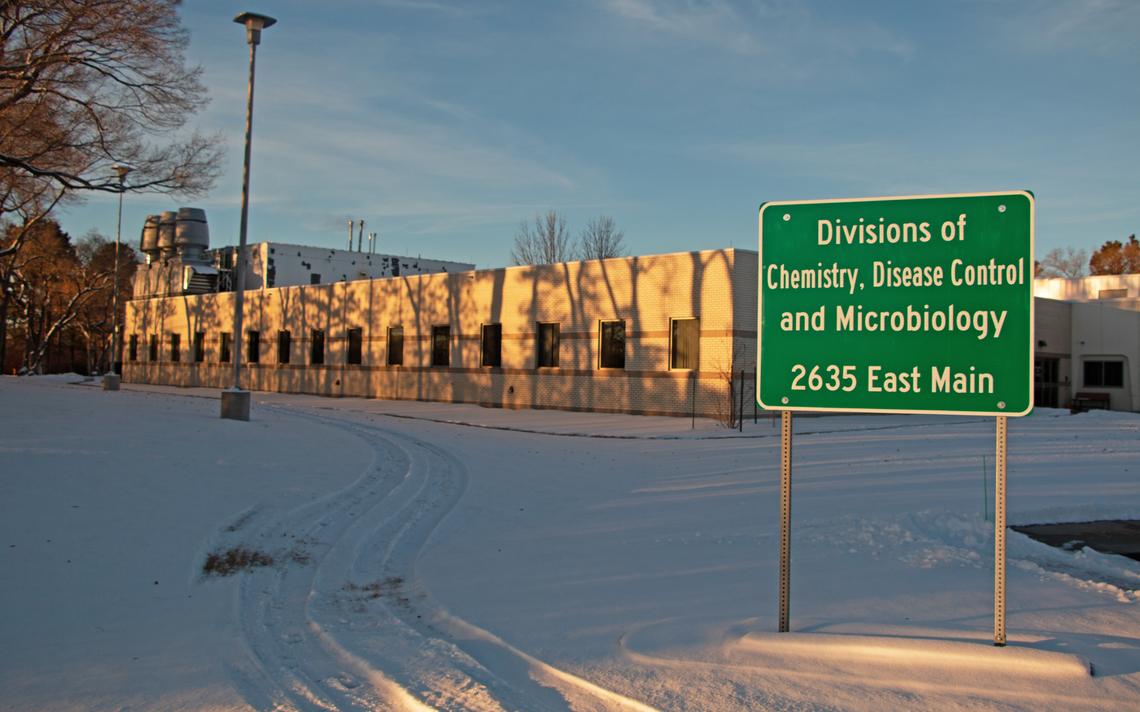 Over the last ten months, the 35-year-old has captained an effort to turn the once-overlooked North Dakota Microbiology Lab into the engine of the state’s COVID-19 response.

Under Massen’s leadership, the Bismarck facility has processed about 65% of the traditional COVID-19 tests taken in North Dakota — likely the highest such proportion of any public lab in the country.

The lab has traded normal business hours for a 24/7 schedule, hired over 100 new staffers and even planted three trailers full of new machines in the middle of its employee parking lot to feed North Dakota’s appetite for COVID-19 testing.

The enormous logistical challenges of scaling up the lab’s capabilities so quickly mean Massen doesn’t really switch off. At one point, she worked 112 days in a row from March to July.

The demands on Massen don’t go away when she takes off the white coat for the day. Her ever-multiplying workload at the lab gives way to her endless duties as a mother of two young boys — and she’s six-months’ pregnant with a third.

Her husband and mother watch the juggling act in awe, unsure of how she keeps up with the whirlwind pace of everyday life.

“She’s so high energy that she just does it,” said Lisa Davis, her mother. “She’s like the Energizer bunny and keeps plugging away at it.”

Massen remains humble about her role in North Dakota’s pandemic strategy, and she’s quick to point out that her team in the state lab works at least as hard as she does.

When asked why she and the lab took on so much responsibility during the pandemic, she simply says, “It’s what we’re here for.”

Scrambling at the lab

The state lab, as it runs today, is a place of organized chaos.

The stretch marks from months of expanding testing capacity are evident. In some rooms, there’s only just enough space to walk through the maze of protruding machines, discarded boxes and rolling tables, but technicians — many of them only a few months on the job — seem to know where they fit in the crowded geography.

Three trailers, now stitched together, look much like the rest of the lab on the inside, only they sit over the spray-painted lines of what used to be a parking lot about 50 feet from the building’s entrance.

The 140 workers at the lab can pump out 7,500 COVID-19 test results a day if needed, though lately the state hasn’t demanded the service at such a high rate.

A year ago, the magnitude of the operation at 2635 E. Main Ave. would have been unfathomable.

In pre-pandemic times, the lab performed tests for a wide variety of diseases, including influenza, sexually transmitted infections, foodborne illnesses and tuberculosis. Massen said she enjoyed work in the lab back then because the job was different every day.

Massen recalls having no more advanced notice of COVID-19’s impending arrival than anyone else. She said she didn’t know that the still-mysterious virus would reach North Dakota until early March, around the time Gov. Doug Burgum said in a press conference that the disease’s advent in the state was inevitable.

So much vital information about COVID-19 remained unknown at that point, Massen remembers. Health experts hadn’t pinned down the exact symptoms, the way it spread or the mitigation efforts that could help stifle it, but one fact became clear: Testing for the virus would be important.

Without a positive test, health officials couldn’t track or isolate the virus, leaving it to run rampant over whole communities.

When the state gained the ability to test for COVID-19 on March 3, Massen and her team of 18 employees frantically tried to find ways to provide more of the service.

“Everything was so fast,” Massen said. “You kind of didn’t have time to catch your breath.”

The lab met its first goal to have capacity up to about 750 daily tests by March 11 — the same day the state confirmed its first known case. But the roadblocks kept coming.

The state had to severely ration tests in mid-March due to a scarcity of supplies. Most tests were targeted toward those with flu-like symptoms and residents who had recently returned from COVID-19 hot spots, like New York or California.

To ease staffing issues, Massen worked on weekends to perform tasks a lab director would rarely do, like filling test kits and entering demographic data. In May alone, she worked 92.5 hours of overtime, the equivalent of more than 11 eight-hour work days. She insists that others in the lab worked even more.

Massen said she wasn’t often thinking about how hard she was working in the spring because she didn’t see any other option.

“You just got to fill in any of the gaps,” Massen said. “Everyone just dug deep and pushed forward to meet the need …. We knew that if North Dakotans were going to get tested, we needed to be the ones to step up to the plate.”

One asset North Dakota had was a governor who cared about ramping up testing through public means, Massen said. While leaders in other states looked to overwhelmed private labs or even wholly rejected the idea of mass testing, Burgum repeatedly made clear in March press conferences that building testing capacity was a major priority because the state needed more data on the virus. North Dakota remains one of the top states in testing per capita.

Massen also credited the North Dakota National Guard’s Civil Support Team with “saving” the state lab in the early days of the pandemic. The specially trained group helped the lab with testing and acquiring new equipment and supplies through July, she said.

As gobs of federal aid flowed into the state, the lab hired dozens of workers to operate new machines around the clock. Testing kits and reagents became more available after March’s mad dash, and the lab could perform more than 2,000 tests per day by May 21. That grew to more than 5,000 by June 19.

Burgum recognizes Massen and her team as playing “an essential role in our state’s pandemic response,” noting that the lab has performed more than 850,000 COVID-19 tests since March.

“The tireless efforts by Dr. Massen and the entire team at the State Lab have been nothing short of remarkable,” Burgum said in a statement. “We’re deeply grateful for Dr. Massen’s capable and steady leadership of this team as it has grown from 18 members to 140 members from the North Dakota Department of Health and North Dakota National Guard, embracing innovation and new technology in the fight against the coronavirus.”

Driving Massen through the turbulence is an ethic learned in childhood.

The daughter of a doctor and a nurse, Massen was privy as a child to dinner table conversations about the field of medicine. Being steeped in the family trade from birth likely shaped the professional Massen has become, said Davis, her mother.

“Being in medicine, you give a lot. Your goal is always to help people, and that’s just what we do,” Davis said. “That’s been kind of our little tagline for so many years. We just do what we have to do to help.”

Massen said she followed the example set by her hardworking parents, and even chose to study laboratory science at the University of North Dakota on her mother’s suggestion.

Now holding a master’s degree and doctorate from UND, Massen aims to pass on what she has learned to others. She has taught online courses as an adjunct instructor at the University of Cincinnati since 2014.

Massen would likely be snapped up quickly if she entered the job market, but she said Bismarck, her longtime home base, is the choice for now. Her husband, former UND hockey standout James Massen, owns a bar and a home remodeling company around town, and she likes having her family nearby.

As for the lab, the future is a little uncertain. The arrival of rapid COVID-19 tests and “COVID fatigue” has resulted in less demand for the traditional tests that the lab runs, and funding in 2021 could be harder to come by. The new COVID-19 vaccine and the immunity it brings could also drive down the need for testing, Massen said.

The accelerated tempo of working in the lab during the pandemic has become normal to Massen, though she notes “that’s a little sad to say out loud.” She said the lab team is hoping to find a new normal that feels less rushed.

Massen said it’s hard seeing past her planned maternity leave in April, but she noted that she’ll spend her time at work figuring out how the lab can use all of its newfound testing capacity to help others and promote public health in North Dakota.

“We will be so much more prepared for the next pandemic, which God forbid happens in my lifetime,” she said, knocking on a wooden table.

No charges against North Dakota priests accused of sex abuse