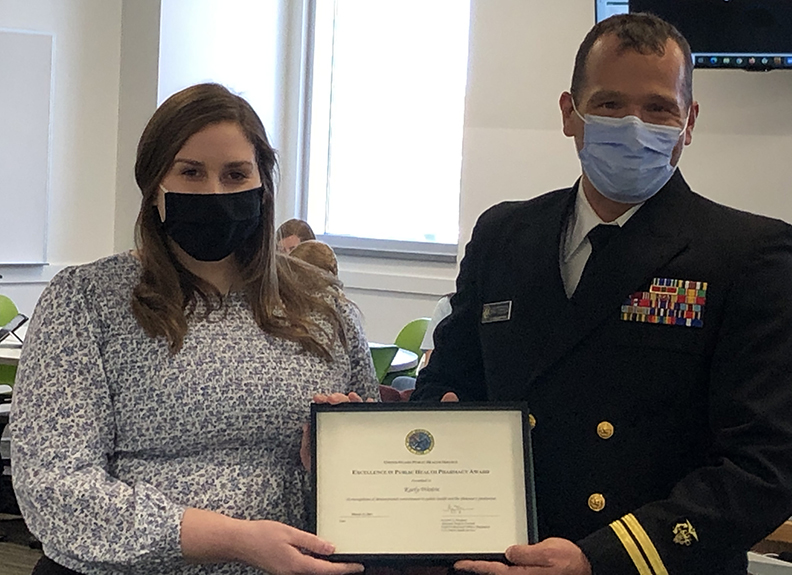 A big honor coming down for one North Dakota State University student making a difference in patient care.

For the past two years, Westra served as ambulatory care clinical pharmacy intern at Family HealthCare, a local clinic that cares for underserved patients who may be homeless, have low health literacy, limited resources, language barriers, or other barriers to receiving health care.

Each week, Westra partners with this patient population. She helps them access care and increase their chances of optimal outcomes in the following areas:  hepatitis C virus (HCV) treatment, tobacco use disorder, diabetes, anticoagulation, transitions of care, and other chronic disease states. She assists in direct patient care and in population health efforts to improve outcomes.

Prior to her internship at Family HealthCare, there were no systems in place for tracking outcomes related to HCV treatment, tobacco cessation, and chronic disease treatment. Westra developed systems for patient outreach, tracking processes, measuring outcomes, and implemented a process to ensure that referred patients are connected with clinical pharmacy care. She also implemented a transitions of care process to help avoid medication errors in high-risk patients.

“In our hepatitis C clinic, Karly helped improve patient communication and engagement, while building valuable rapport with our HCV patient population and helped many to overcome limiting disparities,” said Amber Slevin, PharmD, assistant professor of practice in the NDSU School of Pharmacy, and clinical pharmacy specialist at Family HealthCare.

To help patients with tobacco use disorder, Westra developed a tracking system to help guide quality initiatives and organized a statewide Nicotine Dependence Conference to provide continuing education for more than 80 tobacco treatment clinicians in the state over the past two years.

“Karly Westra serves as a compassionate and resourceful patient advocate, educator, coordinator, and provider of initial clinical work/triage in a variety of areas,” said Slevin. “A reduction in the no-show rate for the clinical pharmacy service has been shown due to the outreach and referral processes she implemented,” said Slevin.

“Helping us to measure success, implement improvements, and research outcomes are all ways that Karly Westra has contributed to helping underserved patients,” said Slevin.

“I’m just so thankful for all the experiences I’ve received at Family HealthCare,” said Westra.

“Everyone’s so kind and helpful and there’s very much a culture of positivity and being positive when we’re speaking to patients and thinking the best of people and giving them second, third and fourth chances.  That’s just made it an incredible place to work,” said Westra, who didn’t initially plan to work with populations who often fall through the cracks of health care systems. “It’s really been something that I’ve fallen in love with.”

In the coming months, Westra will be doing pharmacy rotations with the Indian Health Services in the region.

Pedestrian struck, injured in crash on I-94 in Fargo