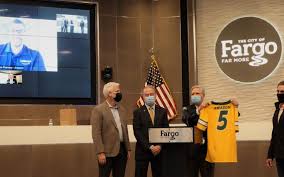 FARGO  – Mayor Tim Mahoney has confirmed that the large building going up northwest of Hector International Airport is an Amazon warehouse or fulfillment center that will bring hundreds of jobs.

Mahoney, during a Friday morning ceremony at city hall, said the project was first proposed in June. The city, developer and Amazon kept it quiet and declined to disclose details of the project until now.

KFGO News first reported last month that work was underway on what the company referred to internally as “Project Force.” The city, while not identifying what the project was, approved annexation and zoning permit changes.

Mahoney says the building is a on fast track with construction to be completed next summer.