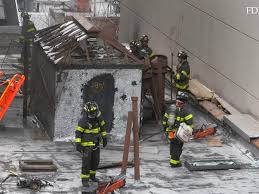 FARGO, ND  – The Fargo Fire Department responded to a fire at Rusco Windows and Cabinetry early Saturday morning after smoke was spotted by a Fargo Police Officer.

Just after 3:00, Officer Danica Rozich noticed the smoke while on patrol near 4th Ave South and 40th St. On arrival, fire crews found heavy smoke inside the west end of the building.  Entering in near-zero visibility, firefighter’s found and extinguished the fire.

Firefighting efforts were hampered by steady winds over 20 mph, which created difficulty in removing smoke from the building.

The building and its contents suffered significant damage. There were no civilian or responder injuries because of the fire.  The fire is currently under investigation.  A damage estimate is not available at this time.

The Fargo Fire Department responded with five fire engines, one ladder truck, and two command vehicles.  The Fargo Police Department and FM Ambulance were also on scene to assist.

Woman fleeing police gets stuck in cemetery, arrested for DUI