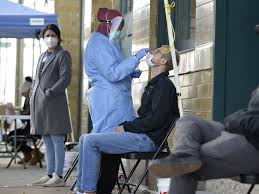 BISMARCK – State health officials say hospitalizations due to illness from the coronavirus reached an new high in North Dakota with 105 people receiving treatment in medical centers.

The record reported Monday comes a day after state officials met with leaders at two hospitals in Bismarck who told a governor’s task force they are nearing capacity because of COVID-19. Burleigh County, which includes Bismarck, leads the state with 719 active virus cases.

The number of deaths linked to the virus in North Dakota has risen to 234.