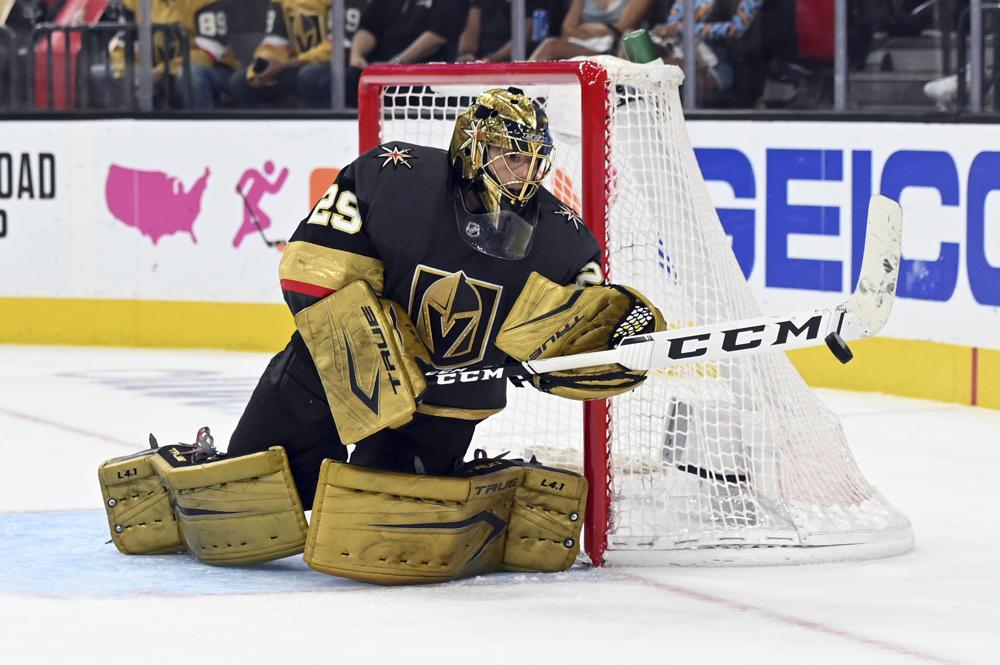 The Vegas Golden Knights stuck to a true rotation for their goaltenders down the stretch of the season, alternating Marc-Andre Fleury without much dropoff in performance to Robin Lehner.

Keeping the 36-year-old Fleury fresh has proven to be a winning strategy for coach Peter DeBoer, who has watched the three-time Stanley Cup champion stop 63 of 65 shots on goal for the Minnesota Wild over the first two games of this first round West Division series that’s tied at 1-1.

Game 3 is Thursday night in Minnesota (8:30 p.m., NBC Sports Network), after the Wild gained a split on the Las Vegas Strip.

“We’re taking this day to day,” DeBoer said Wednesday, declining to commit to keeping Fleury in the net. “He’s done it before and he’s playing at a really high level, so maybe. But who knows?”

What’s clear is how well Fleury, who recently moved into third place on the NHL’s all-time wins list, has played for a Golden Knights team that again has Stanley Cup aspirations. Fleury has won three of those, with the Pittsburgh Penguins, and he helped Vegas get to the finals in 2018 in its inaugural season.

Fleury, who posted a career-best 1.98 goals-against average and .928 save percentage in 2021, has allowed two goals or fewer in 11 straight games since April 11 to match the longest such stretch of his stellar career.

“Our guys have been great at letting me see the puck, and when I don’t, most of the time they block it,” Fleury said. “I thought our defense has done a great job with that.”

The Golden Knights lost forward Tomas Nosek to an injury in Game 2 and have been without star Max Pacioretty for nearly three weeks. DeBoer said he’s making progress and “would still term him day to day.”

The Wild, who won 1-0 in Game 1 on an overtime goal by Joel Eriksson Ek, preached a stay-the-course mentality after losing 3-1 in Game 2. Leading scorer Kirill Kaprizov has been blanketed by the Golden Knights defense. Second-leading scorer Kevin Fiala has skated his way to several prime scoring chances but yet to see the puck go in.

“Just keep pushing, keep pushing, and I feel comfortable for the whole team that we are going to score goals,” Fiala said. “So I don’t think we have to change anything.”

Here’s a look at the other games on Thursday:

Florida’s quest to advance in the playoffs for the first time in 25 years could not have started worse against the defending Stanley Cup champions and their intrastate rival in the makeshift Central Division. Tampa Bay has never lost a postseason series in six previous instances with a 2-0 lead.

Speaking of being ahead after two, the Lightning have not lost in 28 games this season with the lead at the second intermission including both games of this series. The Panthers replaced Sergei Bobrovsky in the net with Chris Driedger for Game 2 and are likely to keep the journeyman in place. They’ll get forward Sam Bennett back from his one-game suspension for boarding.

“It’s one game at a time, and there’s a bunch of slogans that go along with that simplicity,” coach Joel Quenneville said. “I still feel like the guys are extremely positive and feel like we can get it done. That’s got to be our mindset.”

Pittsburgh sidestepped a big hole by riding 38 saves from goaltender Tristan Jarry to a 2-1 victory in Game 2 on Tuesday night. Now the East Division series shifts to Long Island, where New York went 21-4-3 at Nassau Coliseum this season.

The Islanders will aim for more of an early push, after the Penguins controlled long stretches of the first and second period in the first two games. The Islanders rallied to win 4-3 in the opener but couldn’t complete a comeback in Game 2.

“We just have to come out better,” coach Barry Trotz said. “There’s no magic pill that I can give everybody, ‘Take this and have a good start.’ It comes from within. They’ve got to simplify. They’ve got to be ready to go and I’m sure they’re ready to go, but they have to not ease into the game.”

Toronto and Montreal, the last of the 16 teams to take the ice in these playoffs, will meet in the postseason for the first time in 42 years. The Maple Leafs went 7-2-1 against the Canadiens during the regular season, truncated by the pandemic to 56 games with all seven of Canada’s teams assigned to the North Division.

Austin Matthews and Mitch Marner are the guys who make the Maple Leafs go, but goalie Jack Campbell has been a key figure with his 17-3-2 record and a .921 save percentage while Frederik Anderson missed two months with an injury.

“His ability to respond to that was the thing that we found out and we really liked,” coach Sheldon Keefe said. “That’s where things really turned the corner for him, because it wasn’t just him getting hot and putting together a good string. Now things were starting to go the other way, and can you bring him back? Our confidence as a team has really grown since then.”

Three Bison and One Fighting Hawk Are Athlon FCS All-Americans