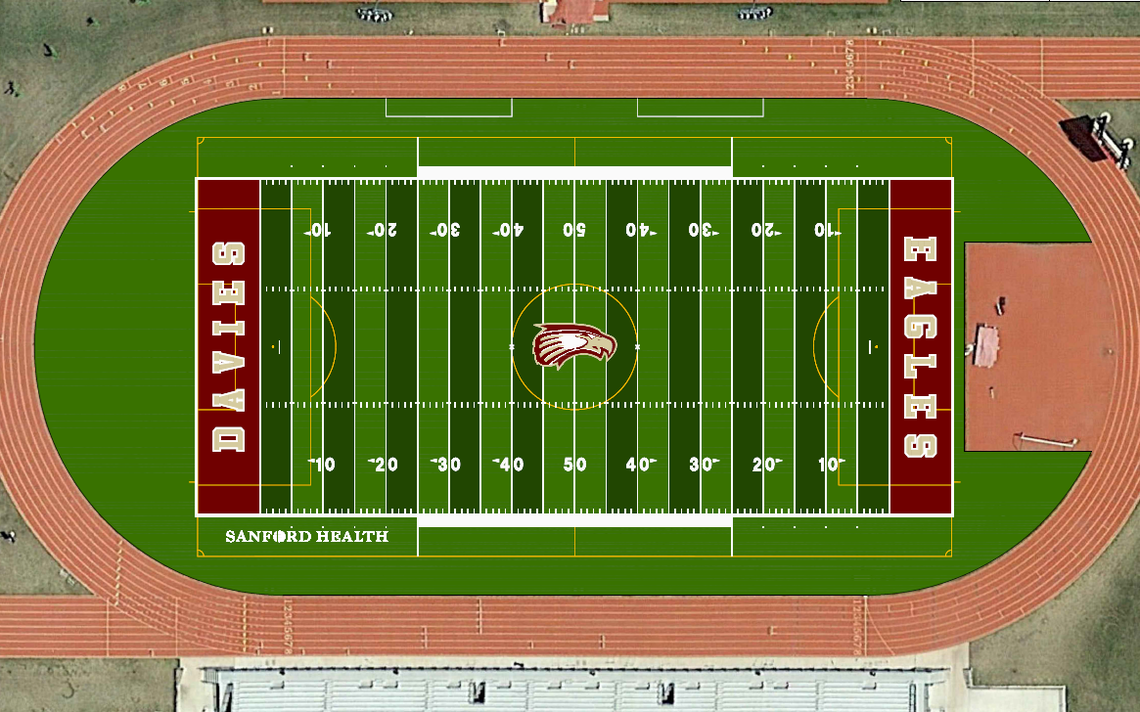 FARGO — The dirt at the Fargo Davies football field didn’t want to cooperate with the members of the Davies Turf Committee as they broke ground on the new turf field installation on Monday.

They found the ground was a little hard as shovels refused to penetrate the surface. They had to really put some elbow grease into their digging to actually break the ground — just one more illustration of how important it is to have artificial turf for outdoor activities in North Dakota.

Luckily they’ll have the help of excavators and bulldozers starting next week when construction officially begins.

“That’s Davies turf,” Eagles football coach Wayne Werremeyer said of the hard field. “I asked (Davies High School principal) Troy (Cody) if he stopped watering this thing two years ago in order to get this ground nice and hard. There’s a lot of memories on this field, but the conditions — the field conditions aren’t ideal.”

Fargo Davies is installing a turf field, shown in a photo illustration, this summer. Submitted illustration

Those less-than-ideal conditions are now set to become a thing of the past. Hellas Construction will begin the installation process on the Matrix Helix Turf field next Monday, May 17. Installation is expected to be completed by late July and there will be a ribbon cutting event in August.

Once Davies artificial surface is completed, every public high school in Fargo and West Fargo will have a turf field. Shanley was the first Fargo school to install one in 2009 and the rest have followed. The last schools in the Fargo-Moorhead metro with grass fields are Fargo Oak Grove, Moorhead Park Christian, and Dilworth-Glyndon-Felton.

With Jamestown adding a turf field this summer, as well, every school in North Dakota Class A school will have turf by this fall football season.

“This is awesome, not just for the football program, but for every sports program out here,” Werremeyer said. “Whether it’s baseball that might be using it in the spring or soccer, football, track can come out here and run on this when the track has still got snow. The amount of work people put in is just incredible.”

Recognizing the need for a new turf surface for the football and soccer field, Davies High School parents took it upon themselves to raise the money and formed the Davies Turf Committee in 2018. They came up with the necessary $1.3 million entirely through private donations.

With Davies having opened in 2011, the school doesn’t have as deep an alumni base as other schools in the area. And the alumni it does have are still young and either still college students or young professionals.

“I made one call to an alumnus and they told me, ‘TC we love Davies, we loved the experience we had, but if I’ve got 50 bucks I’m either going to be spending it at Starbucks or helping to pay off my student loans,’” Cody said. “The other schools in town, congratulations to them, but they’ve got a little larger alumni base.”

The artificial turf field is a more durable and weather-resistant surface than a standard grass field. Even in the rain or snow, athletes can be sure of their footing and know they won’t find themselves sliding around in the mud. Davies has had to move multiple football games to other stadiums with turf fields in order to preserve its field from damage.

Spring sports athletes, particularly the girls soccer team, will be able to get out onto the field earlier in the spring. When they normally would be stuck inside the gym early in the season due to muddy conditions, they’ll be able to get out onto the turf field for practice. They won’t have to play their games on a field so hard that shovels have a hard time piercing the dirt.

And the other spring sports such as baseball and softball will be able to move their practices over to the turf field rather than in the high school’s parking lot as they have in the past.

“We’ve really battled the last three years, we’ve battled mother nature out here,” Davies Activities Director Lenny Ohlhauser said. “You look back in the fall, you’ve got football and you’ve got boys soccer. On a rainy day, you get out there and one football game on a sloppy field and you’re pretty much done with the field. In the fall, you’re not going to get any growth.

“We’ve been fortunate to have Shanley down here to help us back before South (High School) and North (High School) had their fields, to be able to utilize theirs. So thank you to Shanley to help us out when we’ve had to move games.”

Fargo man convicted of killing girlfriend gets life without parole