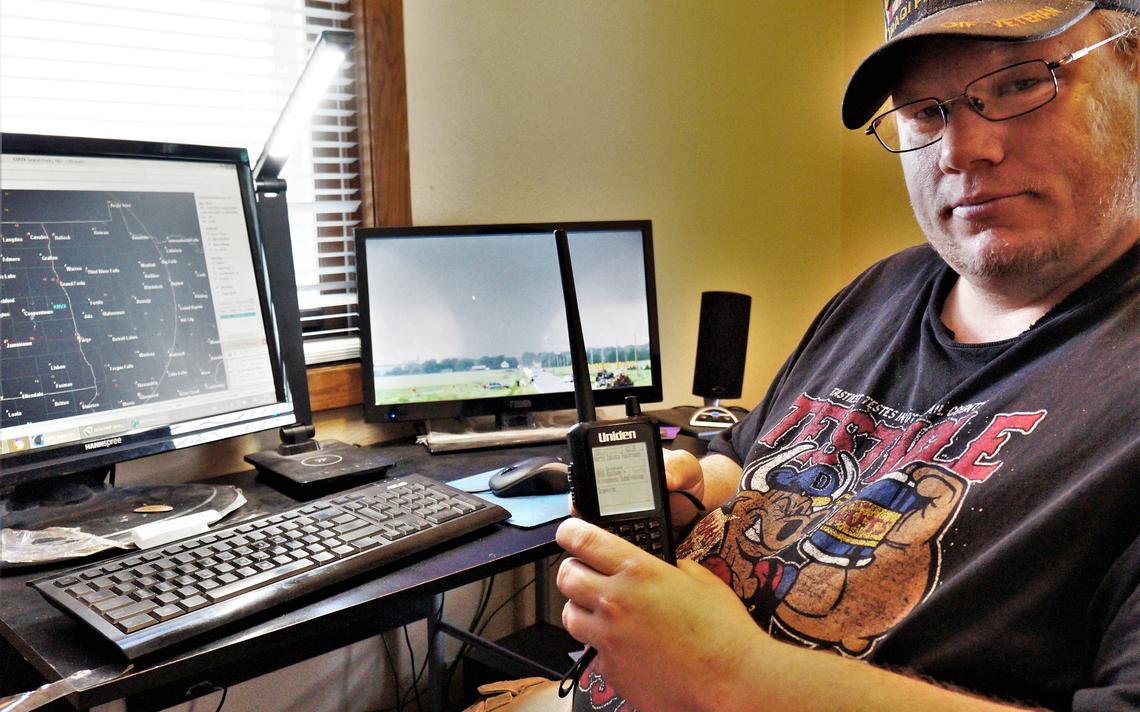 FARGO — Scott Nordstrom is a ham radio operator who enjoys listening to all kinds of radio transmissions, including law enforcement and other first responder agencies on his portable scanner.

But early this spring, he noticed his scanner “chatter” had grown quieter.

Then it dawned on him — he could no longer hear any radio traffic from Fargo police or the Cass County Sheriff’s Office.

Nordstrom sent an email to the Fargo Police Department asking if something had changed and the department sent a reply.

It confirmed his fears.

“They’ve decided to go full encryption,” said Nordstrom, referring to radio transmissions that cannot be heard over the air unless the receiver used is capable of deciphering the encryption.

In addition to hobbyists like Nordstrom, news organizations also monitor scanners to learn about emergencies and other critical incidents in real time — incidents like high-speed chases and armed standoffs.

Nordstrom, who lives in Moorhead, listens to the scanner to find out what is going on in his immediate area and the surrounding region, including nearby Minnesota counties.

“I know people who live in Otter Tail County, so I like to know what’s going on for them. I also listen to it (the scanner) for weather stuff,” Nordstrom said.

Over the past several years, total radio encryption has been adopted by a growing number of law enforcement agencies across the U.S., and agencies’ reasons for doing so widely vary.

In the case of the Fargo Police Department, spokeswoman Jessica Schindeldecker said the agency went to full radio encryption more than a year ago because the department is not allowed to transmit information from the National Crime Information Center or Criminal Justice Information Services over unencrypted radio channels.

Cass County Sheriff Jesse Jahner said his office went to total radio encryption for the same reason and he cited a memo released by the North Dakota Bureau of Criminal Investigation in January of 2020.

The BCI memo required all criminal justice information communicated over a radio system in North Dakota to be encrypted per FBI CJIS security policy.

Jahner said the sheriff’s office used radio encryption before 2020, but it was mostly limited to calls involving citizen and officer safety.

He said shortly after the BCI issued its memo “we went fully encrypted.”

Jahner said deputies can turn encryption on and off depending on the type of information being communicated, but to avoid potential issues altogether, the agency decided to go with full encryption.

“We just went all encryption to take out the human error,” he said.

Since the change, the sheriff’s office has had no feedback from the public, and for the most part, encryption has not affected communication with other agencies, according to Jahner.

“From time to time, if we are communicating with another jurisdiction that doesn’t have our encryption key, it may cause issues. Those would be agencies that we do not work with on a day-to-day basis,” Jahner said.

The West Fargo Police Department said it went to full encryption of radio transmissions within the past few years, but a specific timetable was not available.

On the Minnesota side of the Red River, the Clay County Sheriff’s Office does not encrypt all radio communication but does use encryption for sensitive situations, including calls pertaining to alarms, according to Clay County Sheriff Mark Empting.

Likewise, most Moorhead Police Department radio traffic is not encrypted, though “sensitive” operation traffic is an exception, Capt. Deric Swenson told The Forum.

Nordstrom said he is relieved that some law enforcement agencies on the Minnesota side of the Red River still use unencrypted radio transmissions, adding that in the past his “regular ol’ portable scanner” has picked up car chases as far away as Interstate 90 near the Minnesota-Iowa border.

In Nordstrom’s view, it isn’t clear why any agency would need to go to full-time radio encryption.

He said it would be understandable if police were having major problems with people getting in the way, or getting away due to radio eavesdropping, but added, “I have not heard of any such problems.”

Mark Anfinson, a Minnesota attorney specializing in information law and data practices, said there are sound arguments both for and against expanding encryption of law enforcement communication.

Anfinson, who represents the Minnesota Newspaper Association, said three principles typically come up whenever he hears the encryption question debated.

He said those principles include: his own belief in the importance of law enforcement transparency, a lack of agreement with law enforcement officials on that point, and a growing concern among public agencies regarding liability issues.

Anfinson said when he becomes involved in community discussions about encryption, he typically tries to convince law enforcement agencies that independent public oversight of their activities is a good thing.

There is value, he maintained, to knowing what law enforcement officials are doing in respect to serious matters and he said the only way that can happen in real time is through scanner access.

Anfinson added that whenever he makes that case, few law enforcement officials seem interested in his argument.

“They’re not too moved by this idea that scanner access is really very important as far as their accountability. They think it’s fine if we can look at the police reports and investigative reports and press releases,” Anfinson said.

Anfinson said the most problematic point that is usually raised when encryption is debated is the growing concern among public agencies regarding data and liability, particularly when it comes to information like private medical data.

Another big reason law enforcement agencies are shifting to encryption is concern about sensitive information getting shared online, Anfinson said.

“The fear of liability is a specter that haunts this whole issue,” he explained.

“The traditional news media were extraordinarily responsible about how they dealt with sensitive data,” Anfinson said. “They wouldn’t publish it. It wouldn’t ever show up in our stories.”

But, Anfinson added, if someone has an internet site, or a blog, or a Facebook page there’s nothing to constrain that person from not only acquiring the data, but putting it all online.

“That is another complicating factor that has clearly pushed law enforcement agencies in the direction of encryption,” Anfinson said.

Jack McDonald, an attorney and lobbyist with the North Dakota Newspaper Association, described expanded police radio encryption as the latest example of how ever-changing technology is changing normal access to public records and meetings.

He said other examples include the way records are now being kept in a number of digital formats, from meetings held over Zoom to court proceedings conducted over the internet.

“Things will evolve and work out, but we’re in a transitional phase,” McDonald said.