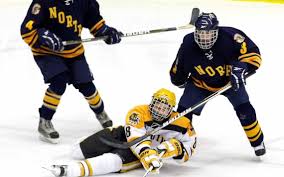 Owen Bartz scored twice for North, including the eventual game-winner late in the third period. Nathaniel Fritel also tallied two goals for the Spartans, and John Martin and Connor Holm each scored one goal.

The Spartans led 5-2 in the second period, but G-PR stormed back to tie it up behind two late second-period goals and a Riley Suda equalizer early in the third period. Jackson Nelson, Weston Sangrait, Landon Carter and Kaleb Hodny each added a goal for the Spoilers.