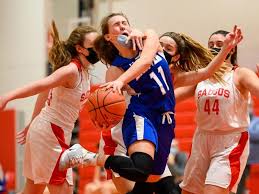 Central Cass junior post Jaylin Cotton said the key to the top-ranked Squirrels’ success this season comes down to their chemistry. The team’s core players have been playing together since third or fourth grade and they know what everybody else on the floor is going to do.

That understanding of their teammates combined with a deep roster or capable scorers allows them to spread the ball around and play selfless, balanced basketball. That balanced attack was on full display as Central Cass defeated Northern Cass 68-51 in Class B Region 1 girls basketball on Friday at Northern Cass School.

“If one girl is having an off night or a not as good night, there are nine other girls that can do the same thing,” Jaylin Cotton said. “We know that in order to win these big games and to win by as much as we can, we need to share the ball with each other. We all are good shooters, we are smart players and we can all do everything. It’s just a matter of finding the girl that’s open.”

Central Cass is unbeaten this year through 13 games and were ranked No. 1 in this week’s statewide media poll. They’ve already beaten three of the other four teams in the top five, having taken down No. 2 Kindred 59-58, No. 3 Grafton 55-53 and No. 5 Linton-HMB 66-39.

The Squirrels started fast on Friday, jumping out to a 10-0 lead on the Jaguars right out of the gate. They got baskets from McKinnon, Smith, and Jaylin Cotton in the opening run and kept Northern Cass at arm’s length the rest of the way.

“One of our goals to every game is to start fast,” Central Cass coach Jay Bachman said. “We want to start fast and set the tempo from the tip. The girls do a great job of that and they really embrace that.”

The Squirrels closed out the third quarter on a 9-2 run to take their first 20-point lead of the game at 51-31. They then opened up the fourth on an 11-4 run with buckets by Victoria Richter, Holzer, McKinnon and Smith to put the game out of reach.

Jaylin Cotton and Smith were strong forces down low for the Squirrels. They both owned the boards when they were on the floor and kept the Jaguars from penetrating and getting points inside.

“We have goals every game and one of our goals we pride ourselves on in every game is to outrebound the other team,” Bachman said. “I’m assuming we did that tonight. Our other main goal is to keep them under 40. We didn’t accomplish that goal, but we accomplished all of our other goals tonight.”

Halle Crockett led NC with 21 points. She helped her team bounce back from CC’s fast start to get within striking distance in the second quarter. She scored six quick points early in the second and got the Jaguars to within seven points at 22-15.

“I’ll give it to Northern Cass — it was tough going up and getting those rebounds against them,” Jaylin Cotton said. “They work hard. They’re very good players. But in the end, when we can come down with those rebounds, it makes us know what our hard work is worth.”