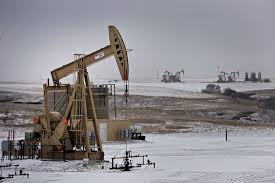 BISMARCK, N.D. – North Dakota’s top oil regulator says nearly a third of the state’s wells have been idled and crude production has slid by more than 20% in recent days amid the COVID-19 outbreak.

State Mineral Resources Director Lynn Helms told the North Dakota Industrial Commission Tuesday that some 5,000 wells have been shut down in recent weeks, accounting for about 300,000 barrels of lost oil daily. Helms estimated the state has lost up to 60,000 barrels of oil production in “the last 24 hours” as oil prices crashed.

Gov. Doug Burgum has called it a potential “economic Armageddon for North Dakota.”