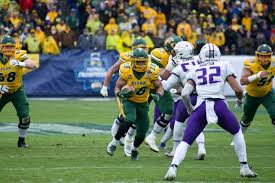 The NDSU football team will officially be down a pair of running backs entering their spring season. Senior Adam Cofield and sophomore Saybein Clark are both leaving the team, but for drastically different reasons.

Cofield, who entered the transfer portal after the Herd’s October game versus Central Arkansas, announced he is transferring to Western Kentucky.

The announcement came via Cofield’s social media on Sunday.

In an interview with the BG Daily News, Cofield said the choice to leave NDSU came down to wanting to expand his knowledge of the game by playing at a different level with new coaches.

Cofield leaves NDSU having been a part of the last three FCS National Championship-winning teams. In his career as a Bison, Cofield amassed over 1,500 rushing yards and scored 20 touchdowns.

Cofield’s go-ahead 71-yard touchdown run on 4th and one with less than three minutes remaining against SDSU last season remains one of the greatest runs in Bison history.

Saybein Clark on the other hand is hanging up his football cleats altogether. Clark told his coaches and teammates that he would be stepping away from his football career to pursue a career in music.

“He’s heavily involved in music, it’s his passion and that’s where he wanted to go with it. I’m excited for him.”

Clark played 17 games in the green and gold amassing over 350 rushing yards and scored three times.

“He left on good terms,” Entz said “He was a great member of the program and we wish him well.”

While the Bison depth at running back takes a hit, one of the luxuries a program gets from winning eight titles in nine years is the talent that usually abounds on the roster.

Sophomore Kobe Johnson averaged a staggering 7.7 yards a carry as a freshman, so a jump in carries in the spring is to be expected.

Lest we forget Seth Wilson who was able to finally return to the field in October after missing the entire 2019 campaign due to injury. Finally healthy and with running back touches to go around, Wilson should play a major part in the Herd’s ground success in the spring.