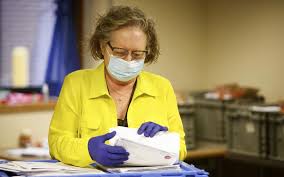 According to the North Dakota Secretary of State website, a total of about 212,000 vote-by-mail and absentee ballots were sent out this year, meaning about 78% had been returned as of Friday.

Based on numbers reported by the Minnesota Secretary of State website, as of Friday afternoon about 1.9 million ballot applications had been received by Minnesota election officials and about 1.6 million completed absentee ballots had been accepted, or about 80%.

About 2.9 million ballots were cast in Minnesota in the 2016 presidential election, meaning early voting ballots already returned in Minnesota represent about 55% of the total number cast in 2016.

Below is a snapshot of the early voting picture in Cass and Clay counties.

As of late Thursday, the total number of mail-in and absentee ballots returned to county election officials amounted to about 28,300, or about 70% of the approximately 40,900 ballots the county sent out.

Also as of Thursday, a total of 25,760 ballots had been cast at early voting sites in Cass County, bringing the total number of ballots cast early — either in person or via mail — to about 54,000, equal to about 66% of the approximately 81,000 ballots cast in the county in the 2016 general election.

According to U.S. Census estimates, the number of people in Cass County of voting age is about 117,000.

In Cass County, ballots from each early voting site are sealed each night and turned over to the county recorder.

Submitted absentee ballots are filed alphabetically by precinct and locked in a vault each night.

Ballots cast at early voting sites are tabulated as they are inserted by voters.

Local election workers may not count votes or generate vote totals or election results until after polls have closed on Election Day, Nov. 3.

In some cases, she said, workers who did not wear masks did have face shields on and were working behind plexiglass sneeze guards.

Buckhouse added some workers cannot tolerate a mask all day, so they take breaks. She said county officials were told they could not require workers to wear masks, but it was strongly encouraged that they do.

As of late Thursday afternoon, absentee ballots returned to the county numbered about 14,400, about 79% of the approximately 18,400 ballots that had been sent out.

As of Thursday, the county had already started tabulating vote counts.

Prior to being counted, absentee ballots are stored in a locked room with limited access.

Clay County has approximately 36,000 registered voters and about 45,000 people of voting age.

Clay County Auditor-Treasurer Lori Johnson said that although the county had to hire seven additional staff to deal with the election workload, “Things are going very smoothly for us so far.”

In Cass County, Shirley Kondelis, an election site supervisor at the Fargodome, said the location experienced few problems during the first ten days of early voting.

According to Kondelis, workers quickly adopted a tradition they exercised whenever a first-time voter came through the line: the entire room would clap and cheer.