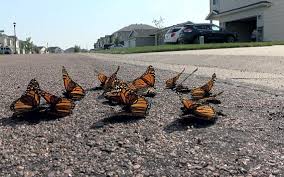 The dead monarchs were discovered around Fargo-Moorhead following aerial spraying for mosquitoes on the evening of Aug. 26.

One theory suggests the mass die-off occurred because spraying happened around the time the butterflies were migrating, and the insects had gathered in large numbers, making them susceptible to heavy casualties.

Numbers of monarch butterflies, an important pollinator species, have plunged throughout the United States in recent decades, with the eastern population down 80% by some estimates and the western population plunging by up to 99%.

Strand has asked the city’s public works director to come up with recommendations, with a staff meeting scheduled for early February. Ultimately, he would like a public meeting to invite comments.

“I just don’t want to have it happen ever again,” he said, referring to the mass butterfly deaths.

Chad Peterson, chairman of the Cass County Commission, said he is open to a public discussion to explore ways of trying to prevent another mass die-off of butterflies from spraying to control mosquitoes.

“We’d welcome the conversation with the city of Fargo,” he said. “If there is still a concern to people, let’s talk.”

Mosquito control has become more aggressive since the arrival of West Nile Virus, which is carried by mosquitoes and can sicken or in rare cases kill susceptible people, including those who are elderly or have weak immune systems.

Also, many people don’t like to be bothered by biting mosquitoes while outdoors, especially in the evenings, when the insects are more active, Peterson said.

“Most people are far more concerned about comfort than deaths,” he said, referring to the butterfly casualties. Peterson said he gets many calls, emails and texts complaining about mosquitoes, but has not been contacted about the butterfly deaths.

“We spray every year, multiple times,” he said. “This has never happened before at this scale, to my knowledge.”

“I think we can reach a happy balance,” he said. “No one is in this to kill insects we don’t want to kill.”

Rebekah Haag of south Moorhead collected dead monarch butterflies on Aug. 27, 2020, and posted pictures on Facebook. She suggested that when spraying is done in the future to control mosquitoes that it not happen when butterflies are prevalent in the area. Special to The Forum

Rebekah Haag of south Moorhead collected dead monarch butterflies on Aug. 27, 2020, and posted pictures on Facebook. She suggested that when spraying is done in the future to control mosquitoes that it not happen when butterflies are prevalent in the area. Special to The Forum

The aerial spraying that is widely believed to be the cause of the mass killing of the monarch butterflies was triggered by a 4-inch rainfall two weeks earlier, which set the stage for a massive outbreak of mosquitoes.

The Minnesota Department of Agriculture received an online complaint from a Moorhead resident soon after the spraying on the evening of Aug. 26, which covered an area of 100 square miles around Fargo-Moorhead.

“On the morning of August 27, I observed many, many dead and dying monarch butterflies on our walk with our dog,” wrote the complainant, whose name and identifying information was redacted by the agency.

The complainant noted the aerial spraying the night before the discovery of the dead butterflies, and asked for an investigation. “I am hoping you might be able to further investigate this so that it does not happen again,” the Moorhead resident wrote. “Many people are upset by what happened and answers as to why it happened are hazy at best. I think it’s very important that the true cause is determined so this never happens again.”