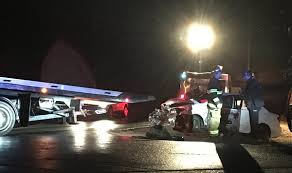 GWINNER, N.D.–A Lisbon woman has died after the Ranger she was driving rolled near Gwinner Thursday evening.

The 46-year-old woman and a 46-year-old man were traveling southbound on 136th Avenue SE when their Ranger entered the west ditch, rolled and came to rest upside down in the water-filled ditch.

The man and woman were both transported to Lisbon Area Health Services where the woman was pronounced dead. The man suffered minor injuries.

The North Dakota Highway Patrol confirmed both individuals were wearing their seatbelts.

The names of will be released once family members have been notified.