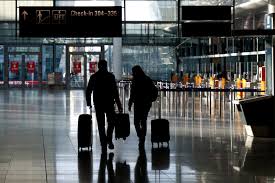 The tests were being offered for free to people on arriving flights in an effort to catch new infections from spreading in the community. The tests are expected to take 15 minutes to give a result.

The number of people hospitalized by the virus also declined to 111, but health officials reported four deaths among people who contracted COVID-19. That brought the total number of deaths to 1,264. The state has seen the nation’s fourth-highest rate of deaths per capita over the course of the pandemic.
Related Topics:
Up Next