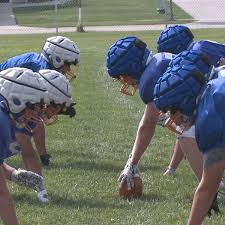 FARGO, N.D.  – Like every other coach in 2020, Jeremy Newton at West Fargo Sheyenne has had to deal with some uncertainties heading into the fall.

But Newton says getting back on the field for football practice has been a nice piece of normalcy in an anything but normal world.

“I think the kids have been real responsive too. They’re eager to do anything. So they’ve been listening and doing the best they can and still trying to have fun and be kids. So it’s been a challenge but it’s been fun,” Newton said Monday.

The Mustangs come into this year with some extra motivation, ending last season with a loss in the AAA State Championship game.

Being so close to the program’s first state title has been fuel for the workouts this year on and off the field.

“I think a lot of those juniors and some of the sophomores got in the weight room for sure. We came and threw routes a lot this summer and just got as much work as we can. Because obviously that was heartbreaking last year. When you look at it, it’s kind of a motivational thing and you want to be back there and you want to get that one,” Junior quarterback Grant Warkenthien said.

Warkenthien brings his experience as the starter at quarterback as a sophomore last year into this season and his coach is expecting him to continue to develop his skills and take what he calls the next step.

“As a sophomore, your progressions aren’t very extensive and you’re not really expected to do a heck of a lot especially from a leadership perspective so those are kind of areas we want to make sure he progresses better into reading defenses and being a better leader. If he can do that, which I’m sure he can, which I’m sure he can he’ll have a decent year,” Newton said.

Warkenthien will be in charge of an offense that features one of the top running backs in the state. NDSU commit Barika Kpeenu, who has one last year to capture his ultimate goal in a Mustangs uniform.

“Ever since I was a little kid I always wanted to win a state championship so this is my last chance to do it and this is the last opportunity that I see myself doing it. I’m just going to take every single day, every single week, to try to reach that goal,” Kpeenu said.