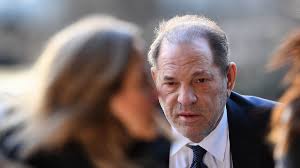 NEW YORK – Harvey Weinstein was sentenced to 23 years in prison Wednesday for sexually assaulting two women, punctuating a landmark case against the once-powerful movie producer whose downfall brought attention to the #MeToo movement.

In its verdict on Feb. 24, a jury found that Weinstein, 67, forced oral sex on former production assistant Mimi Haleyi, now 42, at his apartment in 2006 and raped onetime aspiring actress Jessica Mann, now 34, at a DoubleTree hotel in 2013.

The sentence is seen as a victory for the #MeToo movement, which has toppled numerous powerful men accused of sexual misconduct in recent years, transforming the conversation around assault, harassment and gender. Weinstein’s trial was hailed by advocates as a step forward for assault survivors, especially given that Mann and Haleyi continued their relationship with him after the incidents – and such scenarios were previously considered very difficult to prosecute.

Before Justice James Burke announced the sentence, both of the women read impact statements, and prosecutor Joan Illuzzi-Orbon argued for the maximum of 29 years in prison. The judge also heard from Weinstein’s attorneys and the client himself, who compared the #MeToo movement to McCarthyism while playing down his clout in Hollywood and touting his charitable work.

Haleyi said that the events she described in her testimony “altered the course of my life significantly,” and added, “I’m relieved that there are women out there who are safer because he’s not out there.”

She choked up while discussing the torture of testifying: “I showed up not as a perfect victim but as a human being.”

Haleyi added that her life has been in shambles since deciding to come forward and exposing herself to scrutiny, and that she had feared Weinstein’s retribution. “I had panic attacks and nightmares. I feared for my life.”

Mann, wearing a sweater that read “Give me love,” focused on why she did not physically resist Weinstein, telling the judge it was a common response for a rape victim. She said the producer “had every advantage over me, given the immense physical stature of Harvey Weinstein’s height and weight and ox-like strength.”

She also addressed the discovery of Weinstein’s many nondisclosure agreements with accusers of sexual misconduct, and the people in his world who knew about them. “My rape was preventable. This was a known offender.”

Later, Weinstein spoke from a wheelchair at the defense table. “First, to all of the women who testified, we may have different truths, but I have great remorse for you,” he began.

His speech gradually became more rambling, as he suggested that the wave of sexual misconduct accusations against powerful men in recent years has also gone too far, just like McCarthyism. “There was a scar, and that’s what’s happening, what’s happening now all over this country.”

After several minutes, his attorneys tried and failed to put the brakes on his rant. He insisted that had true friendships and “wonderful times” with Haleyi and Mann, and listed off times when they asked him for favors. “I’m totally confused, and I think men are confused about all of these issues.”

He also argued, “I had no great powers in this industry,” and that his famed indie production company, Miramax, was not as powerful as the bigger studios. Regarding the charge from many of his accusers that he threatened to derail their careers if they spoke out: “I couldn’t blackball anybody, because if I said don’t use that actress . . . Warner Brothers would have said I’m going to use them just to spite” him.

He highlighted his efforts to raise funds for 9/11 victims and families, as well as those affected by Hurricane Sandy. He said that he has not seen his three oldest children since October 2017, when the New Yorker and New York Times published its initial set of sexual misconduct allegations against him. “I just have no idea what they’re doing and I have no communication with them. That for me is hell on earth.”

If he had a do-over, Weinstein said, he would “care less about the movies and care more about my children, family and other people and friends in this life.”

While pushing for the maximum sentence, Illuzzi-Orbon argued that Weinstein lived “a life rooted with criminality, criminality that has gone unchecked for decades.”

“The young, struggling dreamers were not even people to him,” she said of his accusers. “He could take what he wanted knowing there was very little anyone could do about it.”

She added, “He was addicted to the conquest.”

All six Weinstein accusers from the trial sat beside each other in the front row. When the judge adjourned, they shed tears and embraced, and they left the courtroom to cheers and applause.

“We thank the court for imposing a sentence that puts sexual predators and abusive partners in all segments of society on notice,” said a statement from Manhattan district attorney Cyrus R. Vance Jr., who was sitting with the accusers. Other legal experts watching the case have called it a significant sentence.

Weinstein lead attorney Donna Rotunno blasted the sentence from a podium outside the courthouse, calling the length of time “obscene” and “obnoxious” and accusing the jury and judge of “caving” to public pressure.

Weinstein still faces charges in Los Angeles for alleged assaults on an Italian actress, whose name has never been disclosed, and Lauren Marie Young, 30, one of three accusers who testified at his Manhattan trial as supporting witnesses. Young has alleged that Weinstein trapped her in a Beverly Hills hotel suite bathroom in February 2013 and masturbated while groping her.

The L.A. County district attorney’s office announced Wednesday that the extradition process has begun, though it was not immediately clear if Weinstein would first be transferred to an Upstate New York prison before being removed, or if he could challenge the extradition. His health could also complicate the process.

Weinstein’s attorneys are expected to appeal his verdict on several grounds, including their argument that the three support accusers’ testimony unfairly prejudiced the jury, and that Juror No. 11, an author whose novel relates to “predatory older men,” according to a description on the juror’s website, was allowed to remain in the trial. It’s rare for an appeals court to reverse a jury’s conviction and order a new trial.

The judge gave Weinstein 20 years on the top count – criminal sex act in the first degree, against Haleyi – out of a maximum of 25. He tacked on another three years for third degree rape against Mann, out of a maximum of four. The minimum total sentence would have been five years.

Weinstein exited the courthouse nearly two hours after his sentencing ended. Guards armed with semiautomatic rifles stood by as a bus rolled out of a loading dock with lights flashing and sirens blaring. Weinstein could be seen inside, wearing a defeated look and a set of tan, short-sleeved jail scrubs. He arrived at Rikers Island jail complex but was taken to Bellevue Hospital after complaining of chest pains.

At the trial, jurors found Weinstein not guilty of the counts of predatory sexual assault, which would have acknowledged actress Annabella Sciorra’s allegation that he raped her in her apartment in late 1993 or early 1994. Sciorra still attended the sentencing and left hand in hand with actress Rosie Perez, who had testified in support of her story.

On Friday, Illuzzi-Orbon stated in a memo to the judge that it is “totally appropriate in this case to communicate to a wider audience that sexual assault, even if perpetrated upon an acquaintance or in a professional setting, is a serious offense worthy of a lengthy prison sentence.”

Illuzzi-Orbon cited three dozen allegations of sex crimes and other forms of abuse dating to the 1970s, which she argued “establish that throughout his entire adult professional life, defendant has displayed a staggering lack of empathy, treating others with disdain and inhumanity.” At the sentencing, Justice Burke stated, “There is evidence before me of other incidents of sexual assault involving a number of women, all of which are legitimate consideration for sentence.”

Weinstein’s attorneys, meanwhile, argued for the minimum sentence of five years, saying he has already been subject to enough suffering. “Mr. Weinstein cannot walk outside without being heckled, he has lost his means to earn a living” and “his fall from grace has been historic, perhaps unmatched in the age of social media,” his team wrote in a letter to the judge on Monday.

At the trial, Weinstein was shamed by witnesses’ accounts of what they described as his abhorrent hygiene and deformed genitalia, the attorneys said. “Deserved or not, this is certainly a unique and extremely severe consequences that Mr. Weinstein had to endure.”

Weinstein was free on a $2 million bail bond during the trial but had his bail revoked after the guilty verdict. At that point, he had spent no more than a few hours in custody for processing since his arrest in May 2018.

His spokesman said that after the verdict, he was taken to Bellevue and had heart surgery to have a stent implanted before he was taken to the Rikers. His team has alluded to various other health conditions, and he attended his trial with the aid of a walker, which was attributed to his back surgery weeks before the proceeding, though it was criticized by many as a stunt to elicit sympathy.

In their memo to the judge, the attorneys said, “Given his age and specific medical risk factors, any additional term of imprisonment above the mandatory minimum – although the grave reality is that Mr. Weinstein may not even outlive that term – is likely to constitute a de facto life sentence.”

Man arrested after threatening people with knife and fleeing police