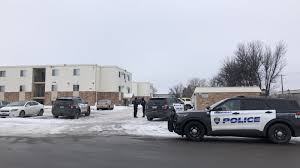 Fargo Police say after actively working the scene, they have determined that the fire at 2101 52nd Street South is an apparent murder suicide of a man and woman.

Police say one of the bodies was found inside the garage and the other was inside the home.

An autopsy will be done Wednesday to determine the manner of death.

No names are being released at this time.

What started out as a call for a house fire in Fargo is now a death investigation after authorities found two bodies inside.

Fire crews tell Valley News Live when they responded, the house was fully engulfed in flames. Three people were able to make it out of one of the units, but two bodies were found in the other burned unit.

At this time, it’s unknown if the people died from the fire or from other causes before flames took over the house.

As of 12pm, Fargo Police’s Critical Incident Command Vehicle is on scene as police work to execute a search warrant on both units of the home.