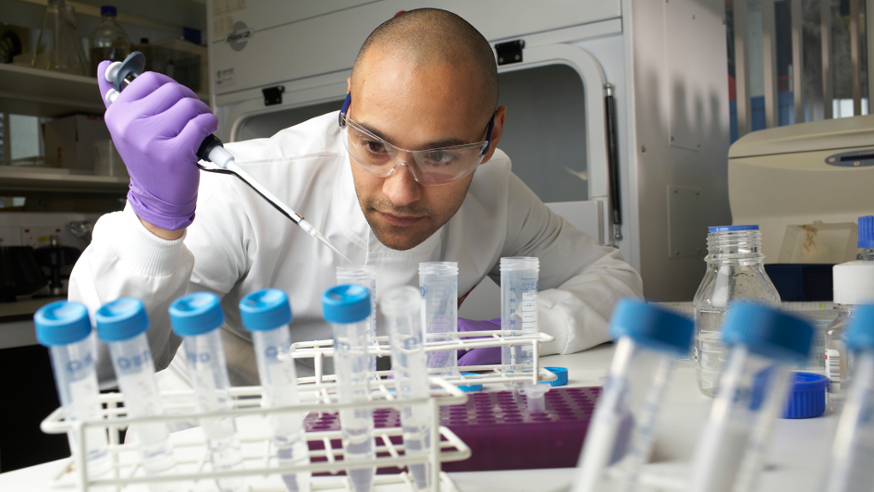 A team of researchers at UND’s medical school have found a new way to treat solid tumor cancers.

Researchers with UND’s biomedical sciences department have identified two new members of the “superantigen” family that, when combined with a common “helper” molecule, showed significantly higher cure rates in and long-term survival of animals with solid tumors compared to other immunotherapeutic agents now deployed clinically.

Dr. David Terman, one of the lead researchers on the project and an adjunct professor at UND’s medical school, said this work is a “definitive step forward” to add to the “arsenal of immunotherapeutics” that can potentially combat solid tumors.

“We’re talking about cancers of the lung, breast, colon, to some degree application here to kidney, and, in our case, melanoma,” he said. “The problem is an enormous problem.”

The work of Terman and David Bradley, an associate professor at UND, was recently reported in the prestigious Journal for Immunotherapy of Cancer.

Terman and Bradley have spent about seven years working on the research.

Superantigens are a class of bacterial-based antigens that induce an “overactivation” of the body’s immune system. Superantigens trigger the white blood cells known as T-lymphocytes or T-cells that help the body generate the inflammatory response that fights infectious organisms and cancer.

Immunotherapy has changed the management of the most treatment-resistant human tumors, such as melanoma, lung, breast and colon cancer, Terman said.

Those cancers have been treated with chemotherapy in the past, Bradley said, but chemo often includes various side effects. Immunotherapies began to “burst on the scene” in the past five years, he said.

“There are ways to deal with cancer, but the reality is most treatments for cancer are not particularly effective, if you look at the big picture numbers,” Bradley said. “This is providing another avenue to deal with a really big problem, the No. 2 killer (in the world).”

Previous superantigens deployed in clinical trials of patients with advanced cancer failed to reach their potential largely due to their excessive toxicity and the widespread presence of neutralizing antibodies in human blood that blocked the superantigens from exerting their tumor-killing function, Terman said.

“Unlike their earlier relatives, our new superantigens showed a low incidence of such disabling antibodies,” he said.

Researchers were able to eradicate the toxicity noted with other superantigens by combining the new superantigens with a partner molecule known as HLA-DQ8. In other words, the pair demonstrated that, when combined with a molecule that helped reduce toxicity, their superantigens curtailed toxicity and also served as “lightning rods” attracting the body’s own T-cells to the tumor and destroying it in more than 80% of mice.

Bradley added that the anti-tumor mechanism of the superantigens appears to be long-lasting and that it also served as a “vaccine” that prevented the development of tumors and withstood subsequent challenges with live tumor cells.

“The tumor killing seemed to be an ongoing response that continued for quite some time,” he said, noting how the mice “were at least 400 days post-treatment, which is the equivalent to more than 60 human years,” without experiencing any recurrence of cancer.

Pending FDA approval, the team is on the cusp of clinical trials in humans. Trials are planned to be carried out collaboratively with UND and a team at the University of Washington in Seattle later this year.