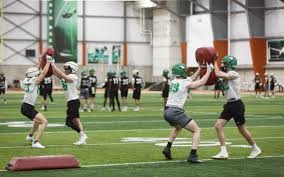 The UND football team worked on special teams drills Saturday morning, which offered a glimpse into the team’s options at returner — both current and future.

At punt returner for the spring of 2021, UND will almost surely give the reins to wide receiver Mikey Griebel, who had all nine of the team’s punt returns in 2019.

Griebel, who had a long punt return of 27, developed into a reliable option after a few years of different players struggling to capture the trust of coaches and fans.

The options at kick returner are much more up for grabs after UND’s 2019 kick returner leader, Cam McKinney, has transferred to NCAA Division II Central Washington.

McKinney had 17 of the team’s 36 available kick returns, averaging 23.8 yards per return, with a long of 50 yards.

UND senior cornerback Evan Holm has a strong history of kick returns, although as injuries have been an issue for the fifth-year player out of Edina, it’s less likely to see him in the return game in 2021.

Here are the details from Day 8:

The scene: UND practiced in helmets and shoulder pads Saturday, going through drills from 7:20 a.m. to about 8:45 a.m. at the High Performance Center. The minor shift in an earlier practice time was to exit the HPC in time for track and field to take over as it hosted an event later in the day.

Participation note: Now that safety Jordan Canady is back going through drills, UND has been pretty healthy. Rookie cornerback Sam Robertson, who has missed the last few practices, took a step in the right direction with some light jogging on the sideline. Wide receiver Elijah Klein appears to be the only injury without a close return date.

Play of the day: For the second day in a row, the most impressive catch of practice was made by No. 1 wide receiver Garett Maag, whose physical nature has been a handful for defensive backs. On Friday, it was Quincy Vaughn with a nice touch pass for Maag for a big gain, while Saturday it was a back-shoulder throw from Tommy Schuster for a 20-yard touchdown in a red-zone practice setting.

Looking good: True freshman running back Creighton Mitchell was heavily involved in the passing game Saturday, making plays out of a variety of looks. Both Quincy Vaughn and Reid Neal hit Mitchell in space and the Iowa native flashed his biggest asset — speed.

Needs work: Deep balls. UND didn’t connect on much deep down the field Saturday, although the best opportunity at a completion — from junior college transfer quarterback Ethan Postler to rookie wide receiver Bo Belquist — was interrupted thanks to a fistful of Belquist jersey by Fargo native and cornerback Haley Bucholz.

EAGLES DOWN HI-LINER GIRLS IN HOOPS