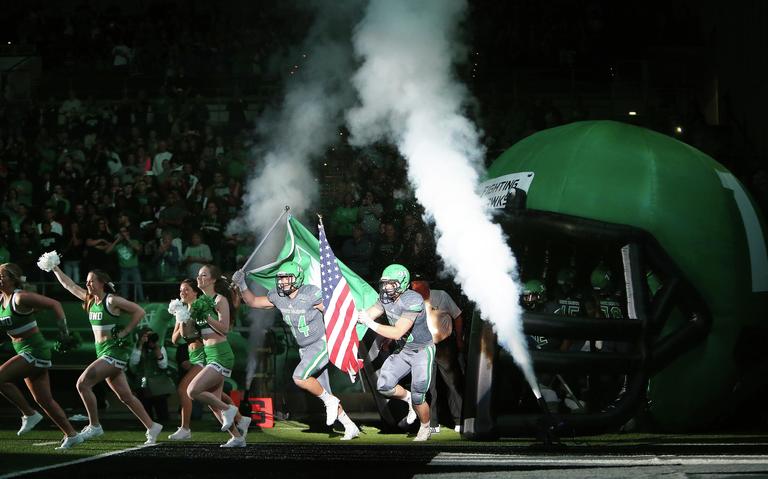 On defense, UND returns a strong corps of experienced talent between the 2019 season and this 2021 spring campaign.

One major area, however, the Fighting Hawks will need to address is at inside linebacker, where Donnell Rodgers is now gone.

Rodgers made 126 tackles last season and was picked to two All-American teams.

As the Hawks turn the page at inside linebacker, UND’s 3-4 defense is fortunate to have plenty of experience returning at one of the inside linebacker spots in Noah Larson, who has started all 23 games in his first two seasons.

“Noah’s played a lot of football for us,” UND first-year defensive coordinator Brett Holinka said. “He’s got a lot of reps in him but still has to develop in terms of the finer details. But as far as a kid who can physically do it, he’s a guy we’ll have to lean on. He’s got to perform at a high level for us.”

White, from Sun Prairie, Wis., saw action in 11 games for UND last year and made 17 tackles. Krzanowski came to UND after St. Cloud State cut its football program. Krzanowski led the Huskies in tackles in 2019.

“Caden has put in the time and continued to develop,” Holinka said. “He’ll play a lot for us. Devon is what we thought he would be — a good football player. He’ll provide depth for us. He’ll push those other guys competitively. They’ve done a good job with him at St. Cloud State. He’s a quality addition to our inside linebacker room.”

“After fall ball and 15 practices, we said this kid got better,” Holinka said.

Three young inside linebackers — Wyatt Pedigo, Jack Ihry and Kasen Kelley — will be vying to see time on special teams.

“You never know how this spring might go, so you have to be ready when your number is called,” Holinka said.

Here are the details from Day 4:

The scene: UND practiced in helmets and shoulder pads Monday morning from about 7:30 a.m. to 9:10 a.m., ending with one session of team drills.

Play of the day: There were both cheers and concerns on the big play Monday, as Brock Boltmann hit on a deep ball to transfer wide receiver Jake Richter, who made the grab but landed awkwardly on the ball as he had to sprawl out to make the catch. Two trainers came out to check on Richter, who eventually jogged off with a smile.

NDSU Volleyball swept UND in their second matchup this past weekend