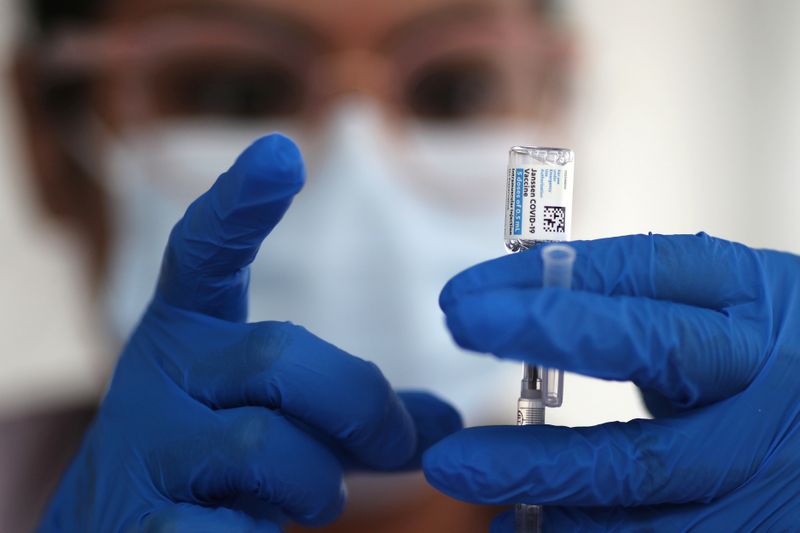 The U.S. government has hit the accelerator on its shipments of COVID-19 vaccines after a month of largely stagnant weekly deliveries, giving states the doses they say they need to finish vaccinating priority groups and open shots to all adults in the coming weeks.

The biggest supply boost has come from Johnson & Johnson. Shipments of the one-shot vaccine had been slow to ramp up since its late February authorization as the company waited for regulatory clearance of a key U.S. factory. Pfizer Inc also has boosted output of its vaccine, doubling batch sizes and shortening production time.

Officials from more than half a dozen states including Vermont, Idaho and New Jersey told Reuters that increased vaccine shipments will allow them to accelerate efforts to inoculate the elderly and front-line workers, and in some cases to open shots to all adult residents earlier than expected.

“The increasing allotment of vaccine by the Biden administration is making it possible for us to speed up our vaccination timetable,” said Ben Truman, a spokesman for Vermont’s department of public health.

Vermont has now decided to offer vaccines to all adults on April 16, a month sooner than planned, he said.

The U.S. government boosted its weekly allocations of COVID-19 doses by more than 20% to 27 million last week. That includes 4 million J&J vaccine doses, up from only a few hundred thousand in weeks prior.

The White House expects that to surge even further over the next week, with plans to deliver around 11 million of the J&J shots. If shipments of the Pfizer/BioNTech and Moderna Inc vaccines remain constant, that should put the total number of weekly shots at more than 34 million.

And Pfizer’s shipments to states has increased, jumping about 25% last week from the week prior and around 45% since the beginning of the month, according to data from the U.S. Centers for Disease Prevention and Control (CDC).

The United States has been hovering at a seven-day average of around 2.5 million shots in arms each day for most of the second half of March as the federal government worked to overcome supply bottlenecks. Vermont expects the increased shot deliveries to allow it to speed vaccinations of priority groups such as teachers and people with chronic health problems that put them at risk for severe COVID-19, Truman said.

The higher allotments of J&J shots, which can be stored in a standard refrigerator and immunize people with one shot, could be especially useful for getting vaccines to hard-to-reach and underserved groups, officials from New Jersey and Vermont told Reuters.

Indiana is using its J&J shot allotments to set up a mass vaccination center at Indianapolis Motor Speedway during the first half of April, a spokeswoman said. Ohio is planning to use mobile vaccination clinics to get J&J shots to harder to reach people.

Residents in Idaho are actively seeking out J&J’s single-dose vaccine over the two-dose Pfizer or Moderna alternatives, said Zachary Clark, spokesman for Idaho’s public health agency, despite data suggesting J&J’s shot is somewhat less effective at preventing illness. He added that Idaho’s allocation of J&J shots it still much lower than the other vaccines.

About half of U.S. states plan to begin offering shots to all residents over the age of 16 in April, ahead of the Biden administration’s target date of May 1 for widespread vaccine availability.

However, Wisconsin officials said they are waiting to make sure the federal government can sustain the increased shipments before committing to a faster rollout.

“We’d like to see more vaccine and more currently eligible people vaccinated before we move to general population,” Jennifer Miller, a spokeswoman for Wisconsin’s public health agency, said in an email.

The companies making the three authorized COVID-19 vaccines have committed to providing the U.S. government with 240 million doses by Wednesday.

More than 25% of North Dakotans fully vaccinated against COVID-19