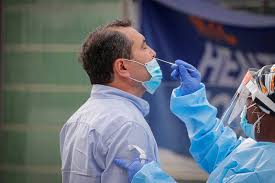 New cases of COVID-19 rose in 27 out of 50 U.S. states in September compared with August, led by an increase of 111% in Wisconsin, according to a Reuters analysis.

The Midwest states of North Dakota, South Dakota and Wisconsin all saw cases surge more than 50% month-over-month, as did Montana, Utah, West Virginia and Wyoming. https://graphics.reuters.com/HEALTH-CORONAVIRUS/ygdvzkaerpw/

Illinois had the smallest increase among the 27 states with rising cases, up 5% month-over-month. The only Midwest states where cases fell were Ohio and Indiana. https://graphics.reuters.com/HEALTH-CORONAVIRUS/dgkvlbkkyvb/

The United States reported 1.18 million new cases in September compared with 1.41 million in August. Overall, cases in the country reached 7.26 million compared with 6.05 million at the end of August, an increase of 19%.

Of states where cases fell month-over-month, California had the biggest decline at 50%, followed by Nevada at 49% and Florida at 47%.

Florida announced on Sept. 25 it was lifting all restrictions on businesses, allowing bars and restaurants to operate at full capacity.

However, many businesses across the United States continue to implement cost-saving measures as profits take a hit from COVID-19 restrictions, such as operating capacity.

Walt Disney Co on Tuesday announced it will lay off roughly 28,000 employees, mostly at its U.S. theme parks, where attendance has been crushed by the pandemic – especially in California, where Disneyland remains closed.

The number of hospitalized COVID-19 patients fell 15% in September from August to around 30,000 at the end of the month.

California and Texas had the highest number of hospitalized COVID-19 patients at over 3,000 each. Vermont had one coronavirus patient hospitalized at the end of the month.