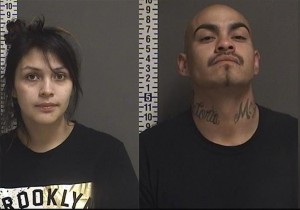 Two people were arrested after a confrontation during a traffic stop injured three Fargo police officers.

Upon officers arrival, the passenger of the car, 33-year-old Irvin Leo Peltier, became verbally aggressive towards officers. He began to physically fight the officers when they tried to detain him.

Peltier was arrested for felony preventing arrest, two counts of assault on a police officer, menacing, felony possession of drug paraphernalia, and an open warrant.

The driver of the car, 22-year-old Alyssah Rachelle Norquay was arrested for misdemeanor preventing arrest.