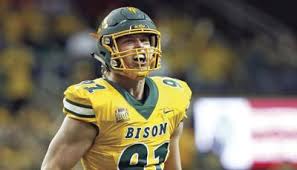 The edge rusher signed his rookie contract with the club, becoming the third of ten to finalize his deal with the organization.

Over his four years at North Dakota State, Tuszka emerged as one of FCS football’s top pass rushers, as he finished his senior season as the Missouri Valley Football Conference Defensive Player of the Year. Tuszka recorded 13.5 sacks and 19 tackles for loss on the year and also earned first-team honors on the 2019 AP FCS All-America team.

According to NBC Denver’s Mike Klis, the seventh-round draft pick has signed a four-year deal worth $3,370,492 with another $75,492 signing bonus.

Tuszka and the rest of the rookies are scheduled to report to Training Camp Thursday, July 22 at the UCHealth Training Center for the first round of Covid testing. The NFL and the players agreed to daily testing for the first two weeks of Training Camp. In addition, two negative test results are required before any player, coach or staff member is allowed into team facilities.